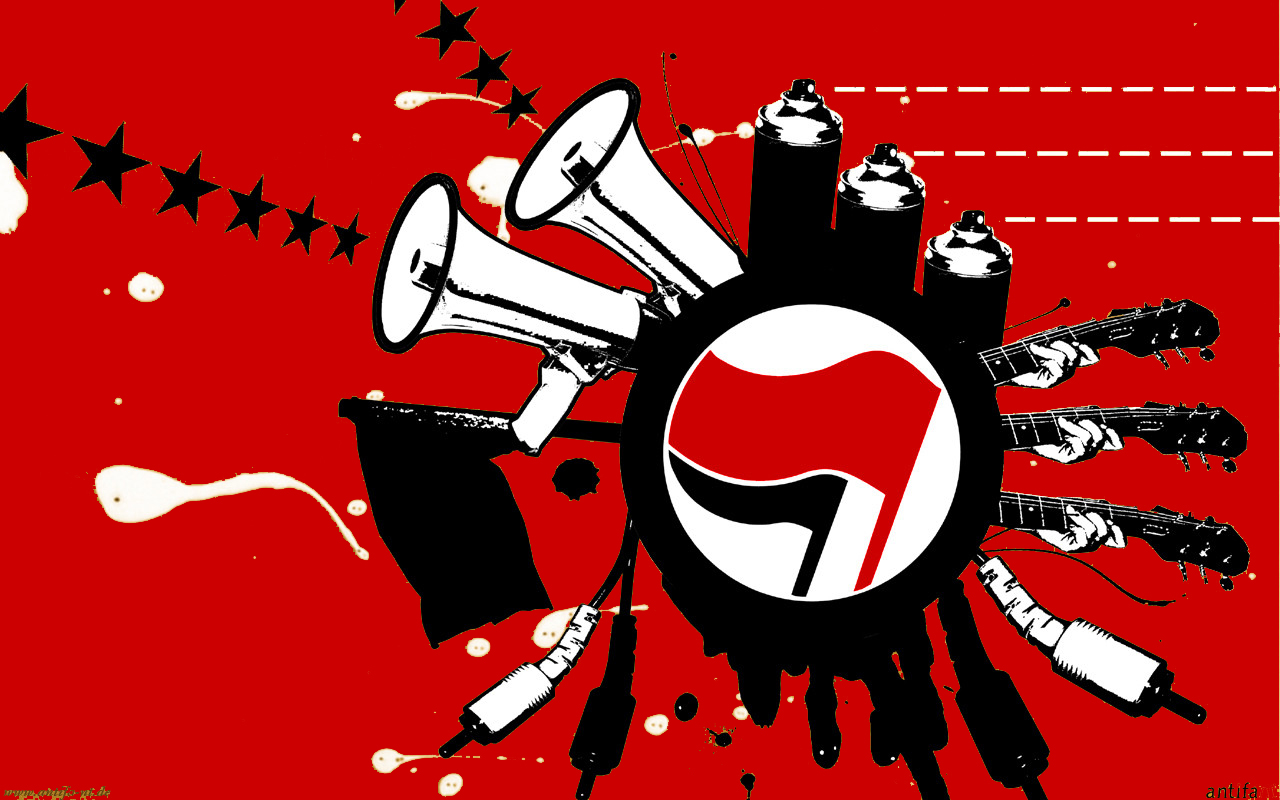 [Update The TESC has decided to suspend bus service to campus starting at 1pm on the 16th in hopes of preventing a counter demonstration from forming.] 1

On Thursday the 15th far right group patriot prayer will be holding a rally on red square at the Evergreen State College in Olympia. Their group claims to be coming to defend free speech and “oppose political correctness” and “reverse racism” despite their attempts to seem like moderate lovers of free speech the group works closely with explicit fascists, and white supremacists. Their leader Joey Gibson puts on a public facade of being about love and christian values but at his rallies he can be seen embracing people who bring swastikas and other Nazi imagery. He often tries to distance himself from some of the more explicit fascists but tolerates the coded “dog whistle” racist expressions for example at the June 10th rally in Seattle and at the June 4th rally in Portland, both of which Patriot Prayer sponsored, multiple people held flags for “Kekistan” which to some means (“Kill Every Kike, Immediately Setup The Aryan Nation”) though this definition is not universal, which takes a green German Nazi swastika flag, and substitutes the letters KEK (“Kill Every Kike”) for the swastika. 2

“Gibson, like other far-right leaders, point to the presence of some people of color at his rallies as “proof” that his movement is not white supremacist. But far-right ultranationalism is not always synonymous with white supremacy alone. U.S. history has not been based on a single generic system of racism, but three parallel tracks of racism: anti-blackness (from the desire for slave labor), anti-Indianism (from the genocidal desire for land), and anti-immigrant sentiment (from the desire for foreign conquest and white Christian cultural purity).

Throughout our history, a divide-and-conquer strategy has been used to enlist other racial groups in white supremacist and Christian supremacist strategies. People of color can be involved in anti-immigrant, anti-Muslim, anti-LGBTQ and pro-police causes. (They can also uphold the values of foreign ultranationalist movements, such as Japanese fascism, Latin American death squads, or South Korean Moonies.) The vast majority of racial justice groups have spoken out against these divide-and rule strategies, and promoted solidarity.”

Joey Gibson has organized with the Proud Boys, Portland street preachers, while the Oathkeepers, Three Percenters and groups like Identity Europa regularly attend his events. Its likely that local groups like the VolksFront, Freedom Riders MC, Atomwaffen, Pacific Northwest Wolfpack, and others will likely be in attendance on Thursday as well. This article in particular has good info on some of the patriot prayer people who will likely be there. 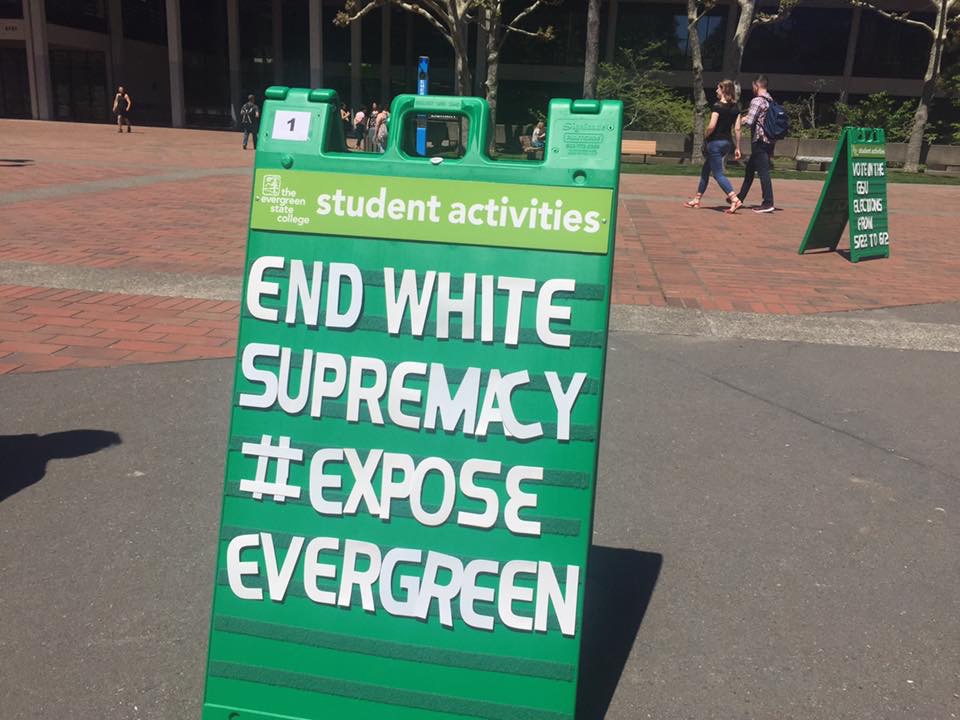 It’s worth taking a brief moment to focus on what brought patriot prayer to campus. Anger over several incidents of anti black racism perpetrated by the Evergreen administration, the police and evolutionary-biology teacher Bret Weinstein spilled over into into vibrant student protests. Bret Weinstein took to twitter and to “The Joe Rogan Experience” and Fox News to bemoan the infringement on his free speech, spreading lies about anti-racist organizing and saying he was being targeted by “#blacksupremacists”. Worse, Bret has released student’s personal information online (doxing). This predictably invited the attention of alt right extremists from all around the country. Over the last few weeks fascists on alt-right online hangouts like 4chan have published more and more personal information of students and teachers, leading to more death threats and rape threats against them. The on campus Trans and Queer Center and First People Multicultural advising received extensive harassment and online threats causing them to close down. Neo nazi and alt-right groups including Atomwaffen, , have put up posters, chalked racist slogans and spray painted at least one swastika. On June 1st a right wing “anti-communist” called 911 saying that he was on his way to Evergreen to commit a mass shooting rampage. In response the Evergreen administration put campus on lock down and many classes have been held off campus. All of this created a climate of fear on campus and the graduation ceremony scheduled for the June 16th has been relocated off campus.

On Friday the 9th right wing hate preachers including two members of Patriot Prayer held a permitted demonstration on campus, and a counter protest was assembled by students. Several trans people were targeted by the Washington State Patrol (WSP). One student was banned from campus and one non-student was arrested. The WSP at this rally also worked with Andrea Seabert-Olson of the Evergreen administration to serve a no trespass order banning another protester from part of campus because of their involvement in previous anti-racist activism at evergreen.

Despite the right wing claims that their free speech is being infringed on it’s clear from this last year at Evergreen, not to mention the centuries of white supremacy, that what free speech means here is that those who have power and legitimacy in society can say and do as they please, and will be defended by the power structure be it the Evergreen administration or the police. On the other hand marginalized people and those who voice opposition to the power structure will be taken to jail, harassed, and attacked. There are those who say that the best way to deal with these fascist groupings is to ignore them because they only want to cause a spectacle and we should not give them more attention. But the truth is that the fascists’ “speech” is connected to their actions. When they show up to hold a rally they are gaining social and political power to advance their agenda. Surely we cannot believe after so many violent fascist attacks around the northwest, that the right wing’s rhetoric is all bark and no bite. Their rallies and organizing spaces make possible violent attacks like when Daniel B. Rowe attacked an interracial couple in downtown Olympia stabbing a black man 4 times in August of 2016.

Tolerating free speech for racists makes possible the violence like the stabbings by Jeremy Christian in Portland on May 26th the shooting at UW in Seattle on January 20th and the fascist attack in Olympia on the same night.

This Is a Call

This is a call out to antifascists, radicals, artists, anarchists, anti-racists, queers, feminists and others to oppose the patriot prayer rally at Evergreen and drown out, embarrass and expose them as the bigoted pathetic fools that they are. To be successful in this we will need many different tactics, skill-sets and supplies please bring your self, food, water, things to make noise, music, medic skills and supplies, masks, flags, art, banners and signs. Come prepared to have each others’ backs. Meet on Red Square at Evergreen at 4:30pm and be prepared to stay until after they leave 7:30pm.

“Kek doesn’t stand for what the author wrote it does – or at least, to 95%+ of the people who say it/post about it – which could lead to major issues down the road with people assuming that people are rabidly anti-Semetic who aren’t. Kek was originally the frog-headed Egyptian god of chaos that has now been merged with Pepe the frog (who was around for many many years before anyone considered him a right wing symbol) into a sort of god of internet trolling, and Kekistanis are people who believe in spreading that chaos. Although their flag is unfortunately based on the Nazi battle flag, that gets them in trouble with people on all sides of the political spectrum – they’re attacked by neo-nazis for it as well as antifa. In effect, they’re trying to troll everyone. Kek/Pepe was somewhat co-opted by the Trump campaign (which is what brought out Hillary to call Pepe a symbol of the alt-right, which is true but only partially and only to some people), which understandably makes a lot of people upset.”