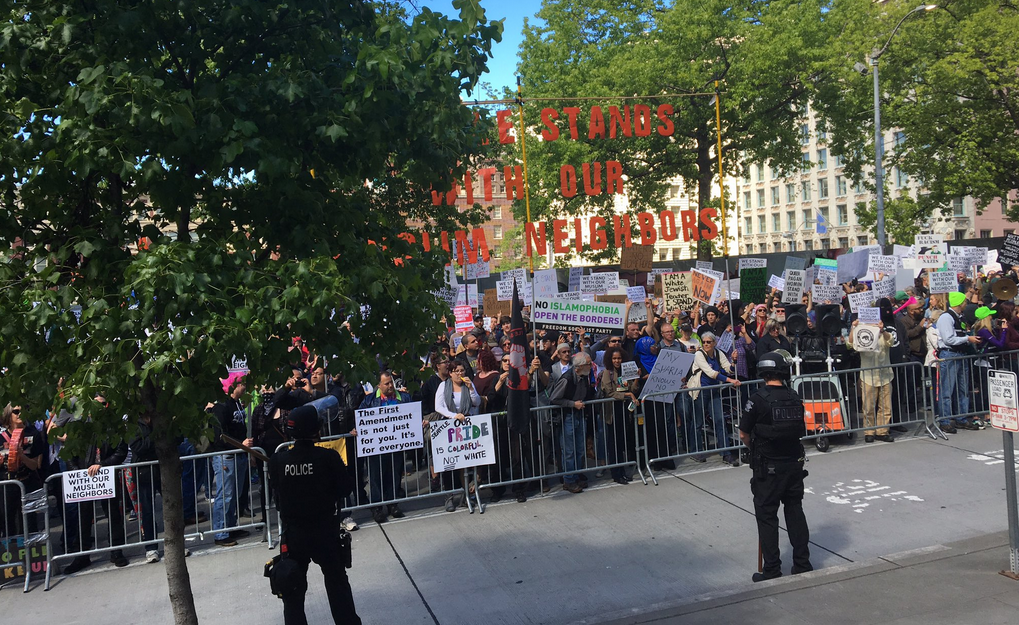 After seeing the callout for a counter-rally against the anti-Muslim rally organized by ACT for America, we decided to join up with the noise brigade put together by Seattle Solidarity Network.

We got to Westlake Park a bit after 9 and saw comrades already gathering. From the start it was clear we were ready to bring the noise: folks were handing out whistles, someone had a bag of vuvuzelas (those wonderfully annoying soccer horns), and a few people brought full on sound carts including what looked like three semi-truck horns rigged up to a car battery.

Around 9:45 someone announced that the main liberal/socialist march from Occidental Park had gotten underway to City Hall, where the fascist rally was underway. That seemed to be our cue to go and we set off along the sidewalks for the 8 or so block trip. Along the way we seemed to pick up a few other people so that by the time we arrived our contingent was probably 100 strong, joining the larger group of maybe 1000 standing against a hate rally with 75 or 100 people in it.

Immediately as we arrived, we let loose with the noise, to the cheers of those already there. The group mostly took up a position on the front lines against the police barriers and began drowning out the hate in front of us. A friend who slipped into their rally at one point to take some pictures told us later that the noise was deafening, and that the people who seemed to genuinely be there for ACT’s rally (as opposed to those for whom it was just a pretext to assembly and start fights) seemed to have very low morale seeing both the huge crowd assembled and being unable to actually hear a damn thing.

We heard there were a few minor scuffles while the rally was taking place, mostly on the edges when Proud Boys or other jumpy fash tried to jump in. The only one we witnessed was on 4th and James on the right flank of the counter-rally when we stepped off the line for a bit to rest. Someone started yelling that Proud Boys were coming and that we should form up, and it seemed as if a small group of them had made a loop around the block. Almost immediately upon turning the corner one of them threw a fist and a small fight broke loose. While they may have started it, they certainly didn’t get away without getting their own asses kicked. Seattle PD bike cops, who had been standing nearby the whole time, only stepped in to intervene when the Proud Boys were put firmly on the defensive, a pattern which repeated itself later in the day.

Although the ACT rally was scheduled to go until 2, they packed up around noon. We would like to hope that this shortening was a result of the huge turnout against them. At that time, most of their group seemed to leave. A small group, which included the Proud Boys as well as the people who came up from Portland with Joey Gibson (the host of last week’s Portland rally), seemed intent on “marching” which proved to mean stalking the counter-rally as all of us, noise brigade included, headed back to Occidental Park.

On the way back we found ourselves working with other like-minded attendees as well as the orange hatted marshals from the Seattle General Defense Committee to defend the rearguard of the march from these wannabe brawlers. No fights emerged during the march itself, though we were very satisfied to see Joey Gibson get glitter bombed and covered in silly string.

When we arrived at the park, the socialists and NGOs involved in organizing held a triumphal little rally of their own while we and many others, masked up or not, remained on the edges of the park. Several groups were following the fash as they attempted to come to the park and we wanted to make sure they didn’t have a chance to surprise or blindside anyone, especially vulnerable folk in our crowd.

Eventually a group of fash rolled up with a police escort who seemed to just want to stand off on the side. At the same time a group of half a dozen or so Proud Boys came from the other direction entirely unescorted. This group were the same ones who had started the earlier scuffle we witnessed up near city hall.

Pretty soon a brawl broke out, with them again throwing the first punch. It went on for some time with cops mostly standing on the side, until it was pretty clear that the fash were getting beat. At that point Seattle PD decided to step in and used bikes and pepper spray to separate us, arresting three of our comrades in the process. Not one Proud Boy or other fascist, who had started every fight that day, was arrested, adding yet another rock to the mountain of evidence that “Cops and Klan go Hand in Hand.”

Overall, the day felt like a victory. ACT’s sorry excuse for a rally was entirely ruined for those who for some reason actually wanted to listen to islamophobic bullshit. Every time Proud Boys or other fascists tried to attack, they were driven off and only saved by the intervention of SPD. The comrades arrested have, hopefully, a fair bit of jail support and we have heard that charges, if they will even materialize, will be minor.