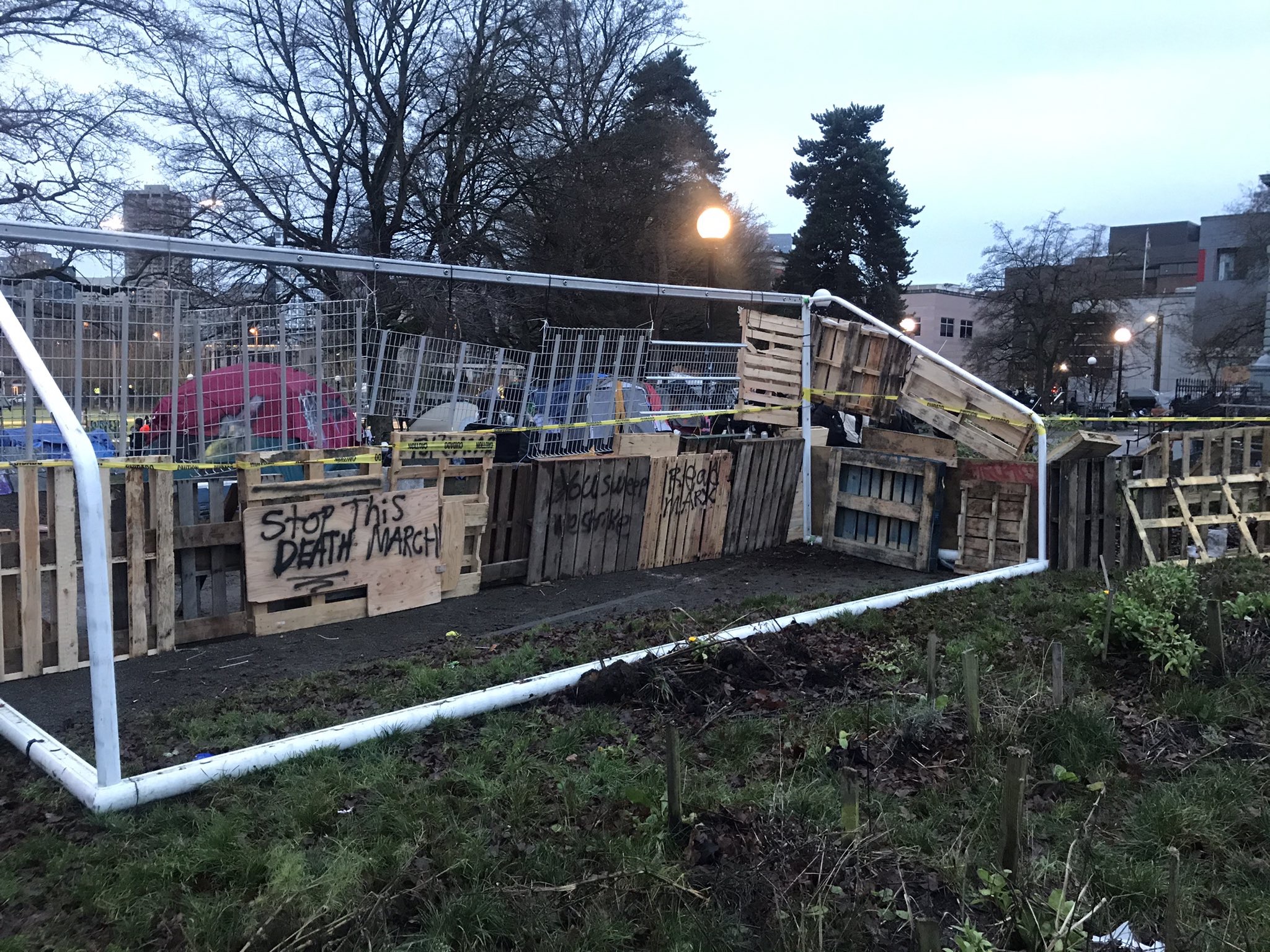 For the sake of anonymity, security, and tactical efficiency, no other pictures of the barricades or interior of the barricades at Cal Anderson Park will be shared in this post. Featured image borrowed Nathalie Graham who had nothing to do with this article @gramsofgnats

On Monday December 14th, Seattle Police and Seattle Parks employees attempted to enter Cal Anderson park just as dawn was rising to enforce a sweep of the houseless community that has been living there since the end of the CHAZ/CHOP earlier this summer. Seattle Police and Seattle Parks and Recreation employees alike were repelled from entering into the more populated areas of the park by community members, leaving notices stapled to a tree that informed of their intention to sweep the park and for residents to vacate before Wednesday, December 16th, 7:30am. The need for action became clear.

A public call for discussion on how to respond went out on social media channels, and preparations begun by the end of the night for repelling the violence of the state. But first, some context. Seattle has been in the midst of a housing crisis for years, well before the beginning of the Covid-19 pandemic. It has been common to see parks, sidewalks and other spaces throughout Seattle inhabited by people who otherwise do not have houses to live in. Seattle city government has developed a multitude of bureaucracy to address this clear symptom of the failures of a municipality to serve its people, and it largely boils down to a violent and traumatizing process known as a sweep. When a sweep at a houseless encampment occurs, residents are given zero advance notice and are awakened by police at their tent or structure door. Residents are ordered to provide their identity, which can result in arrest if someone has a warrant. Then, residents are informed they must leave the area and take all of their belongings with them, otherwise the city will dispose of them. Sometimes these sweeps happen when a resident isn’t around to answer for their belongings, and those people lose everything. The police are accompanied by Seattle Parks and Recreation employees, and together they trash and destroy people’s belongings, promising to hold them in storage while they recklessly toss them into a dumpster. This act of displacement and destruction of someone’s home and belongings is inherently violent and traumatizing, as well as exceptionally abhorrent given the Covid-19 pandemic with the onset of winter in the Pacific Northwest.

With a clear understanding of what’s at stake for our houseless neighbors in Cal Anderson park, preparations began to defend the park and its residents from police action. As dawn slowly crept upon the park Wednesday morning, over 100 people milled about the perimeters of an impressively barricaded space within the center of the park. It seems as if anything that wasn’t permanently affixed within a three block radius of the park was disassembled and repurposed for the intention of physically preventing police from harassing park residents and destroying their property and dwellings. Fences, pallets, soccer goals, barbed wire, and more were expropriated from nearby construction sites and a 360 degree barricade was constructed. A mobile kitchen announced pancakes were available. Food and hot drinks abounded. People laughed with each other, sharing stories from weeks of street fights with nationalists and police alike, but tensions also remained high as we anticipated police action.

Around 7:30am, someone announced that police in squad cars were seen on the north side of the park. Two minutes later, another group of squad cars were seen on the south side of the park, lights flashing. Twice, large groups of cops drove past the park with their lights flashing, yet the police made no attempt at moving into the park. Tensions remained high, and people stayed at ready. Come 10am, people started to relax more, and some began to leave, ostensibly to relieve themselves from being up all night building and strengthening barricades, or to possibly just find a bathroom.

As this article gets published, there has still been no police or city parks movement on Cal Anderson. Local news stations report Seattle Parks and Recreation have announced they will be postponing the sweep, an immediate victory but not a permanent one. The police may be waiting for a more opportune time to move in on the park, creating a protracted struggle in which to draw out the militants and make them weary. Maybe tonight, tomorrow, this weekend, next week, only time will tell. But what we do know is that people are willing to take up militant means to defend their houseless neighbors against the violence of the police and the city government who wish to displace them.

Remember, it is not the police who order sweeps of houseless encampments, they are merely the foot soldiers. Those who pull the strings are city officials without badges, yet they have names and addresses all the same.