UPDATE: It has been brought to our attention that Sean-Michael David Scott’s now-former employer has severed ties with him. This post has been updated to reflect as such.

Over the past several weeks, anti-fascists have been exposing the violent, bigoted Proud Boys in the Seattle area. On August 21, 2019, there was a community advisory issued about the threat of violence posed by Tanner Jarl Peterson and his violent, child-abuser roommate Bryan Joshua Hanks. On September 5, 2019, an article documented violent, Proud Boy bigot Zachary Thomas Staggs. This article will identify Seattle Proud Boy Sean-Michael David Scott as a dangerous neo-Nazi. We will document the rallies Sean has attended, describe his profound, obsessive hatred for those of Jewish heritage, and finally call for readers to participate in an action. 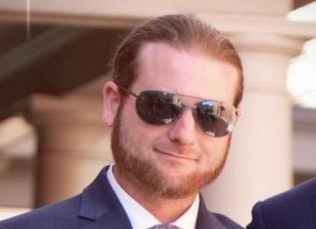 Sean originally came to our attention when he was one of several protesters that wore the skull mask commonly associated with neo-Nazi groups Atomwaffen Division and the Rise Above Movement to a protest outside a Seattle area library. The following day, via Twitter, Sean identified himself as one of the masked protesters, then proceeded to send numerous “selfies” and anti-Semitic/neo-Nazi tweets to Seattle area leftists. Because we had pictures of Sean both masked and unmasked as well as pictures of his easily identifiable tattoos, we were able to track him from event to event. However, there was no way to positively ID him until we received identifying information via email. 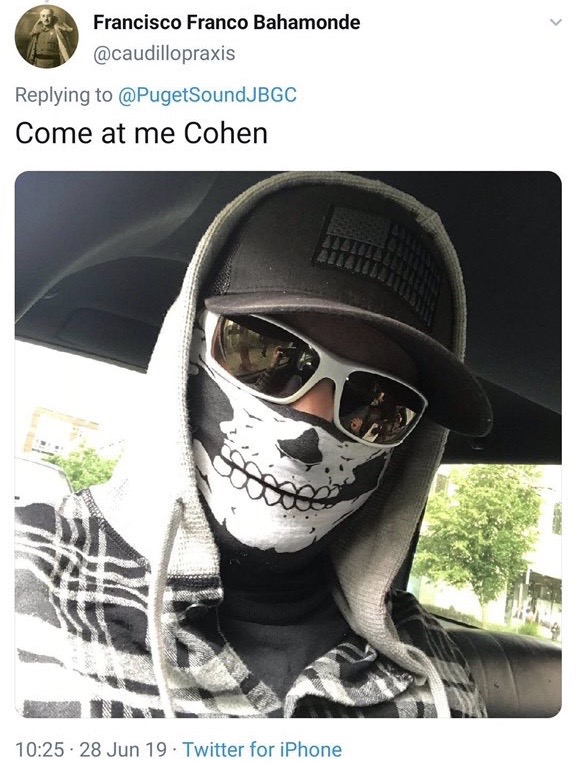 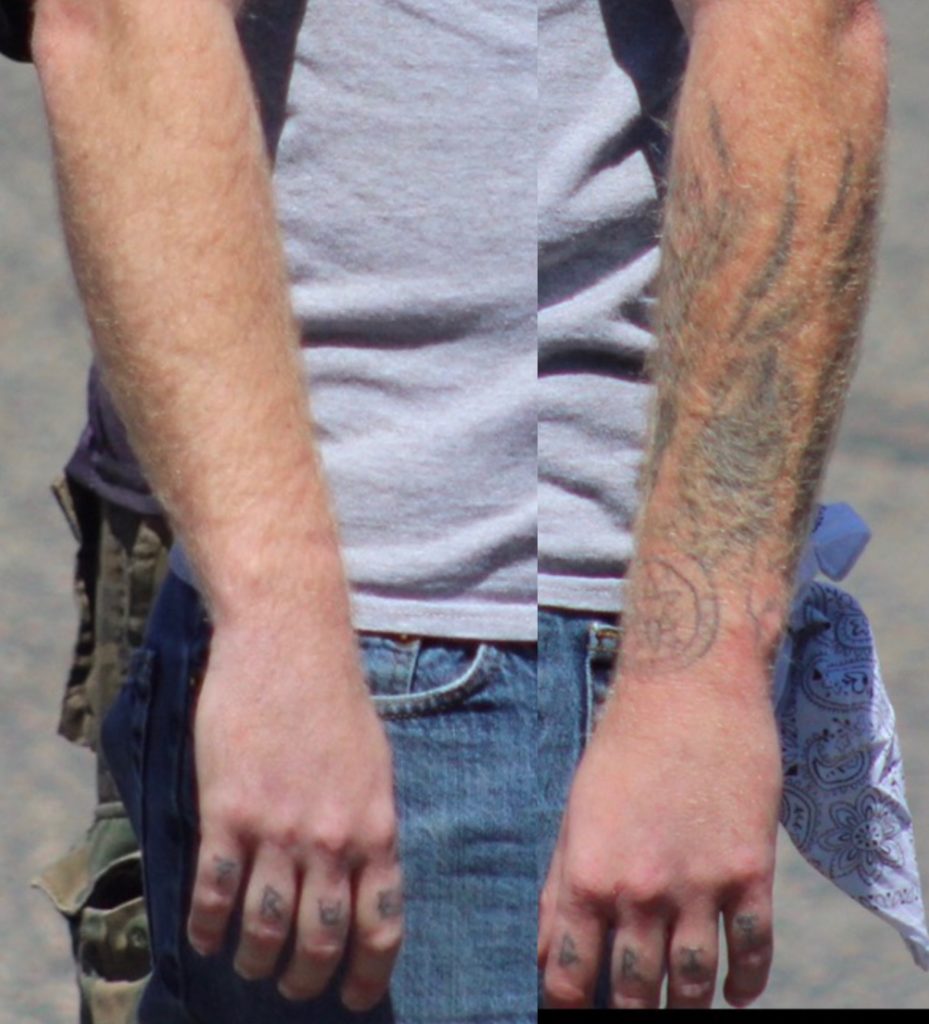 Sean’s Attendance At “Patriot” Rallies And Other Events

We believe the first public Seattle-area event Sean attended was a protest of U.S. Representative Ilhan Omar’s appearance in Bellevue, WA. This protest received advance media attention from the likes of Seattle blowhard Jason “Rantz” Antebi and attracted a large contingent of the notoriously Islamophobic Proud Boys. We believe this event is where Sean met many of the Seattle Proud Boys and the hosts of the unpopular YouTube channel, Operation Cold Front.

Sean attended the event “Operation Cold Front comes to the University of Washington” hosted by the University of Washington College Republicans. Operation Cold Front was largely known in Seattle for rehashing the tired meme “It’s OK to be white,” which grew out of 4chan and neo-Nazi Discord chat. This sparsely attended event included mostly UW College Republicans and Seattle Proud Boys. 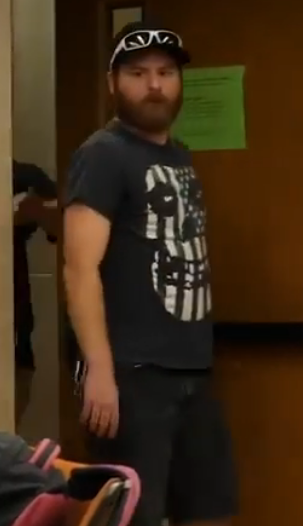 Operation Cold Front hosted a live video discussion on YouTube with the chat enabled. Of course, the live chat during this video was riddled with anti-Semitic discourse. Conveniently, Sean Scott chatted using an account with his real name; his comments were almost entirely anti-Semitic in nature.

There was a small “MAGA march” at Westlake Park in downtown Seattle. Sean was seen with Seattle Proud Boys including Tanner Jarl Peterson, Bryan Joshua Hanks, and Zachary Thomas Staggs. He appeared in this video harassing local liberal Jerry Savage. 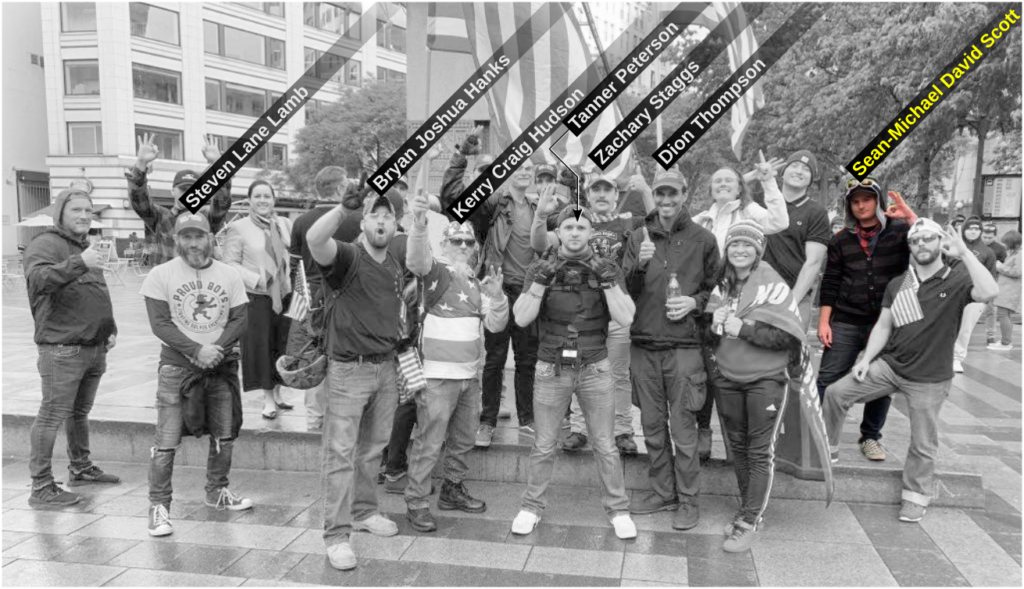 Sean attended a protest of a Drag Queen Story Hour at a Seattle area library. Protest attendees included members of the Seattle Proud Boys and 3% of Washington. As mentioned previously, several protesters were seen wearing the skull masks made popular by Atomwaffen Division and the Rise Above Movement. Attendees of this event reported that protesters made sexualized threats as well as menaced children. 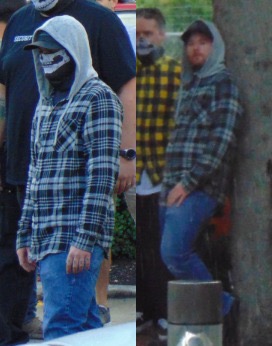 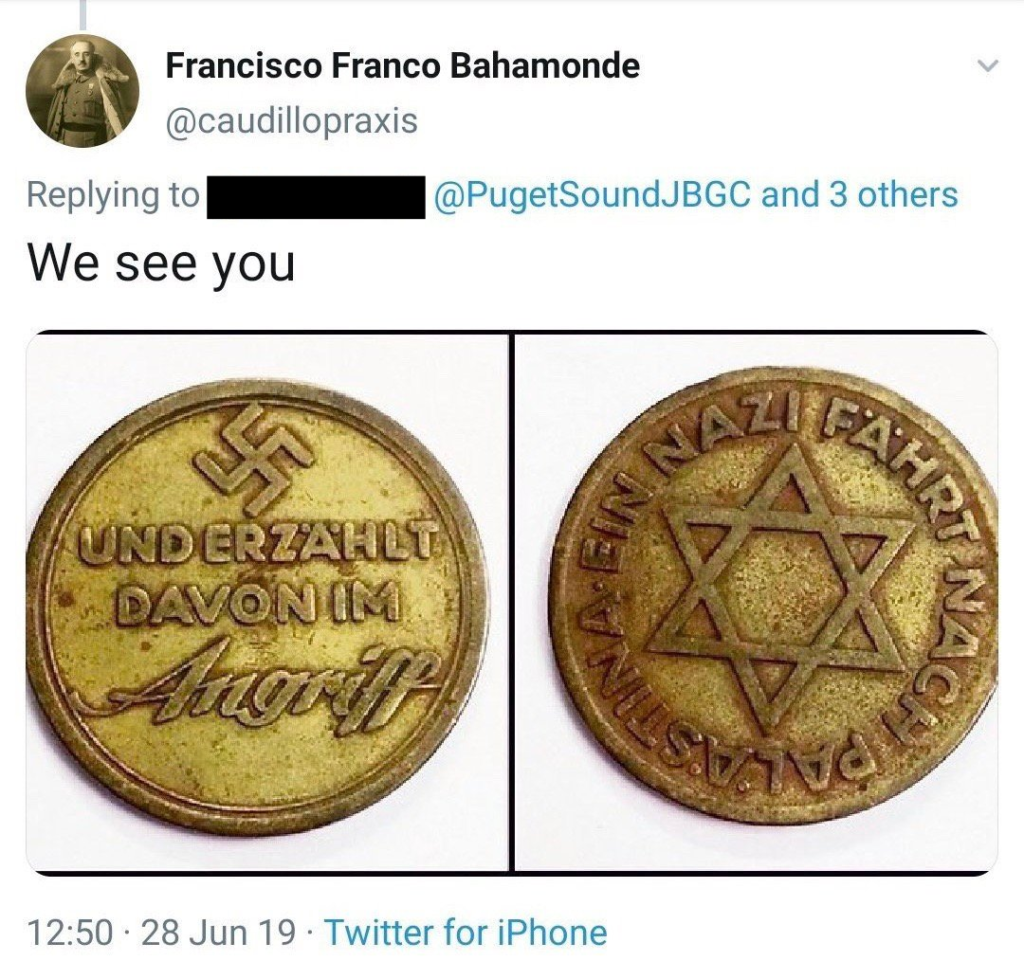 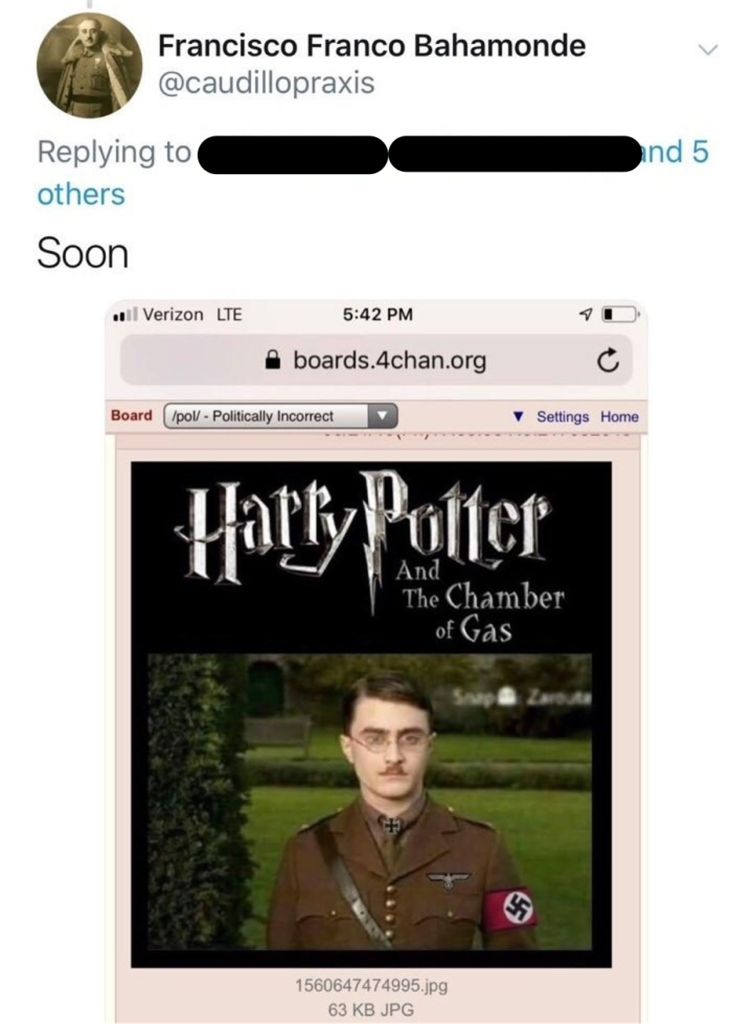 Sean also sent tweets that demonstrated his familiarity with the Atomwaffen Division. “Read Siege” is a meme that references the collection of newsletters written by James Mason that were compiled into a book called Siege. The Atomwaffen poster he tweeted is one of many similar posters likely designed by a Canadian Nazi Dark Foreigner. 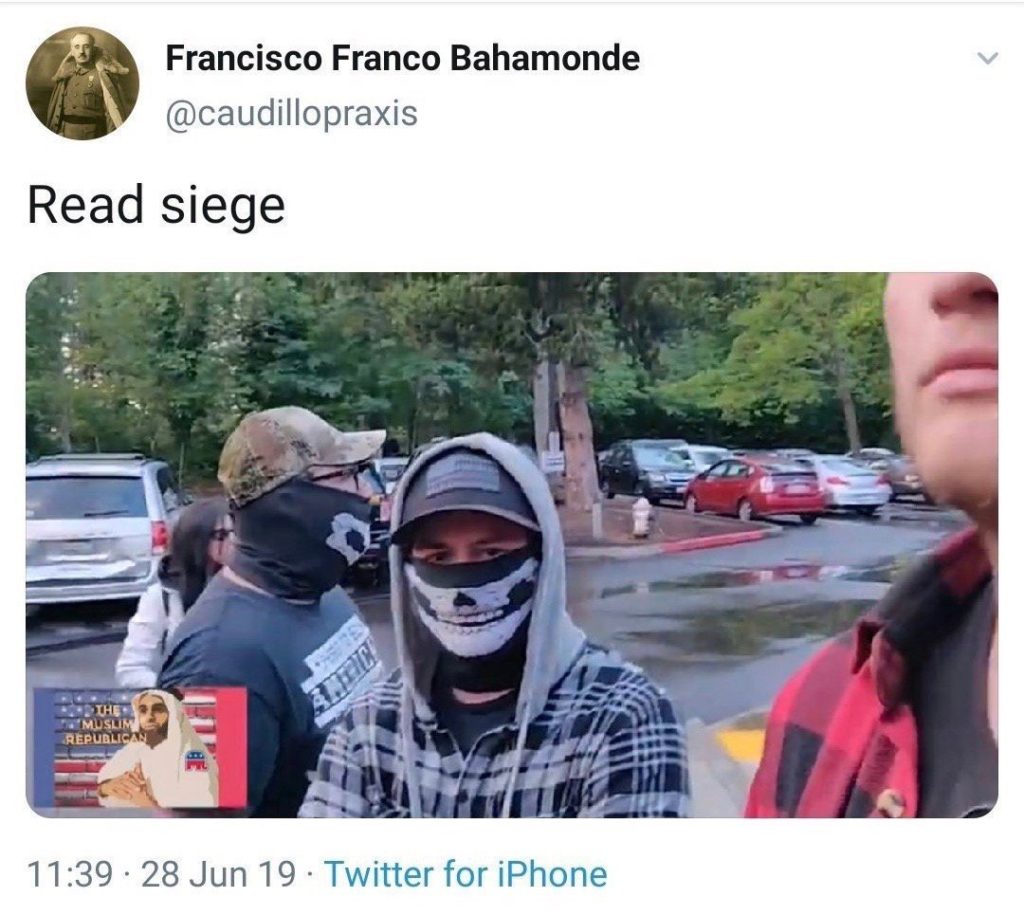 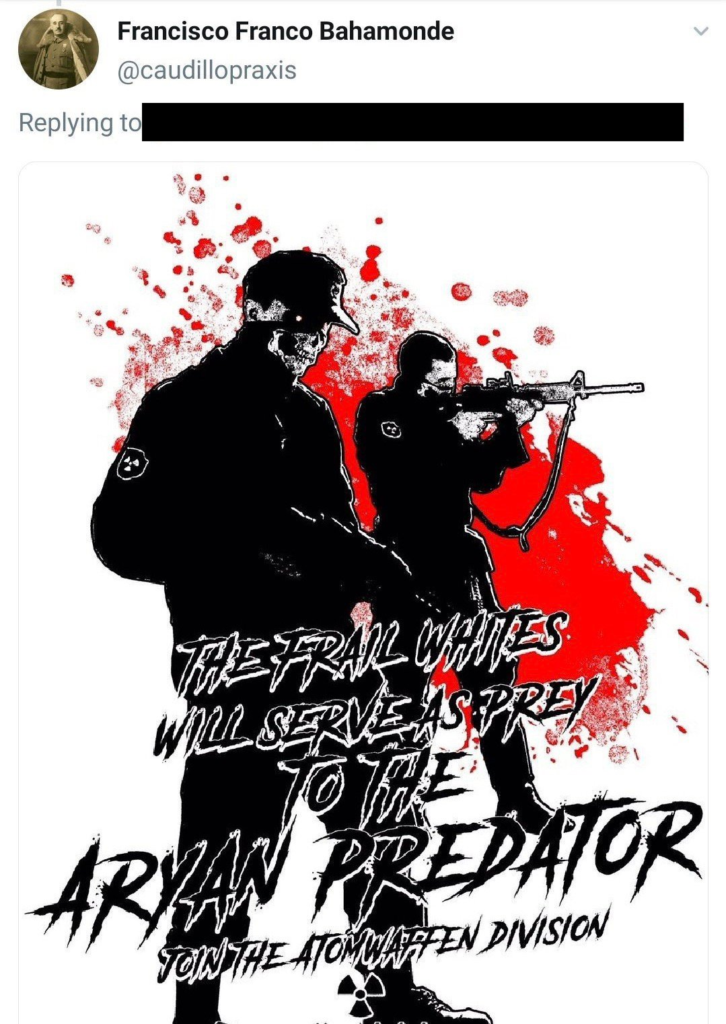 On July 20th, 2019, assorted right-wingers, Seattle Proud Boys, and 3% of Washington held a rally in support of ICE and against anarchist Willem Van Spronsen who had just lost his life at the hands of the police at the Northwest Detention Center in Tacoma. Sean wore a skull mask at the start of this event and made a costume change mid-event. 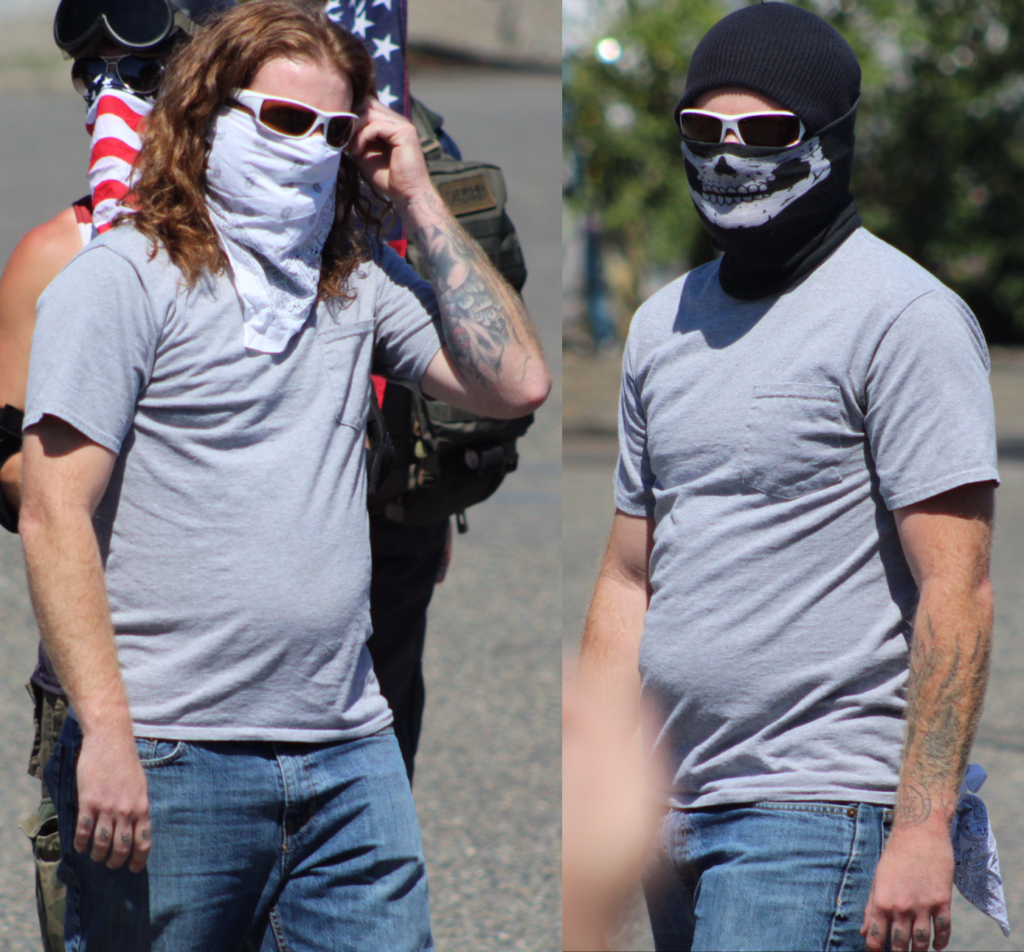 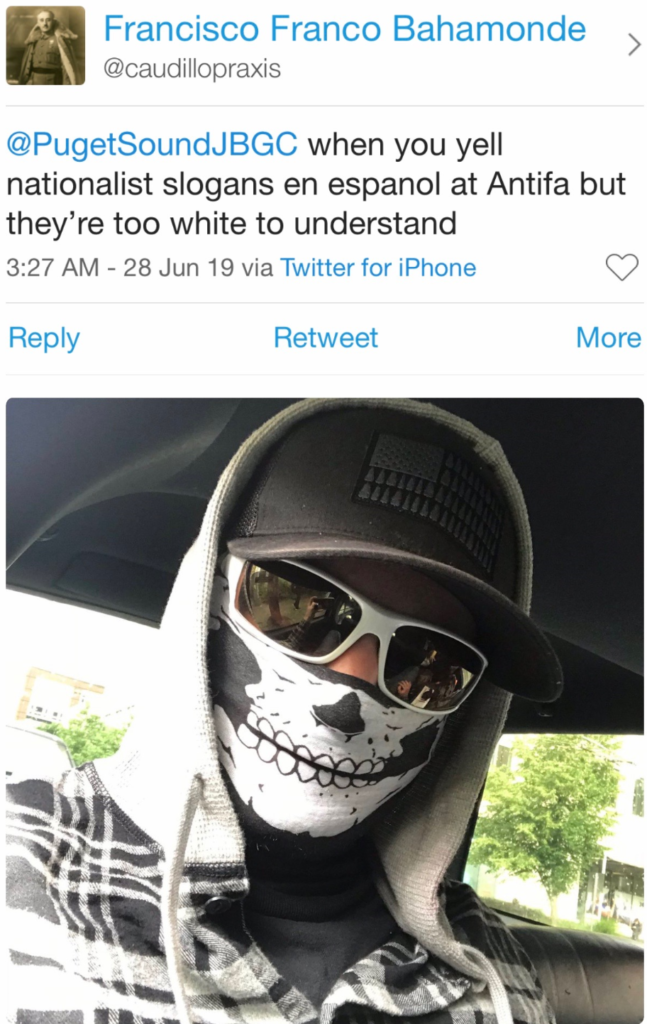 Sean showed up with a group of Proud Boys and militia members to counter-protest an event called “Rally Against ICE: Fight For Thy Neighbor” outside ICE’s downtown Seattle headquarters. This was the first time Sean was seen wearing the Proud Boy uniform. 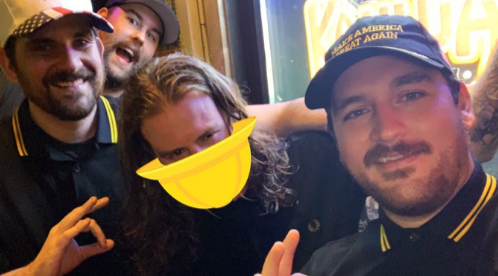 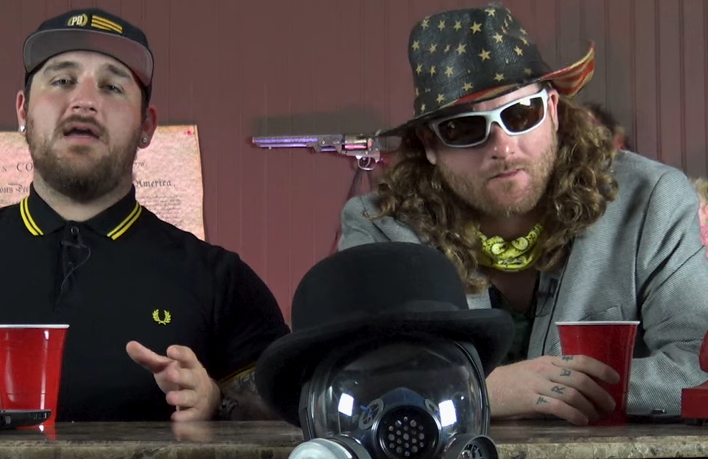 Telegram is a chat messaging program that allows private messaging, private group chats, and audio calls. Telegram is also the most recent platform taken over by neo-Nazis. Sean was active in several group chats but we will primarily focus on two. The first is “The Noticers,” which is the discussion group for the channel “The Noticer / The European Man.” The second is “RWCS – THE OMEGA PILL (PUBLIC)” which is the discussion group for the main Proud Boy channel.

“The Noticer / The European Man” channel was started on August 20, 2019, when the founder realized his Twitter account was likely to be banned (it has been). This channel quickly became the fastest growing channel on Telegram per /telegrampol/. The purpose of “The Noticer / The European Man” is to compile profiles of people who have self-identified as Jewish. “The Noticer” compiles several tweets and a face picture, which are then posted to the group. The group chat associated with the “The Noticer / The European Man” channel is an explicitly Nazi group chat–it is comprised of well-known Nazis such as Paul Nehlen, a failed congressional candidate, and “Vic Mackey,” founder of Bowl Patrol, a podcast well-known for labeling mass shooters like Brenton Tarrant as “Saints.” The administrator of “The Noticer” is a neo-Nazi who once commented “Alright fam, we’re currently sitting at 1377 subscribers – only 111 away from a very special number.” This “special number” is 1488 which stands for the “14 words” coined by the dead Nazi terrorist David Lane and 88 which stands for “HH” – an abbreviation of “Heil Hitler”.

On September 2nd, 2019, antifascists in the Pacific Northwest noticed a brand new discussion group for “The Noticer / The European Man” channel. The very first comment in the discussion group was by an account using the name “Fozzie Donowitz.” We recognized this name as the Twitter account of a Jewish member of the Puget Sound John Brown Gun Club. After chatting for a bit, “Fozzie Donowitz” changed his name to “The Gael.” Thanks to logs of the chat we can verify that “Fozzie Donowitz” and “The Gael” are screen names for the same user.

“The Gael” was also a member of the Proud Boy discussion group “RWCS – The OMEGA PILL (PUBLIC).” We looked through the messages from “The Gael” and recognized some of his posts. The below picture sent by “Proud Boris” looked very similar to the picture Sean had sent via Twitter on June 28th – “Proud Boris” had also been mentioned in this Twitter thread documenting the persistent and seemingly acceptable anti-Semitic chat found within Proud Boy chats. When we looked at a current log of the message, the message now showed it was sent from “The Gael.”

Proving “The Gael” is Sean-Michael Scott was rather simple but here are a few things which will prove it beyond a reasonable doubt. “The Gael” stated he is about to turn 34 years old and from Volusia County, Florida. We know Sean’s birthdate is 12/23/85 and voter records from both him and his parents show he is from Debary, Florida which is in Valusia County, Florida.

Sean’s good buddy Zachary Thomas Staggs also helped us verify that “The Gael” is Sean-Michael Scott. In a tweet Zac dares someone to doxx the skull mask-wearing guy at the NWDC protest. Zac used a picture of Sean from when Andrew Yang came to Seattle. Sean used a meme of this same picture in the Proud Boy chat. Not only is the tattoo on Sean’s knuckles visible, but Sean uses the same “Come at me” language he used earlier towards PSJBGC.

Zac and Sean also post the same picture of a flyer they removed – a flyer alerting the Seattle area to the presence of Operation Cold Front and the Seattle Proud Boys. 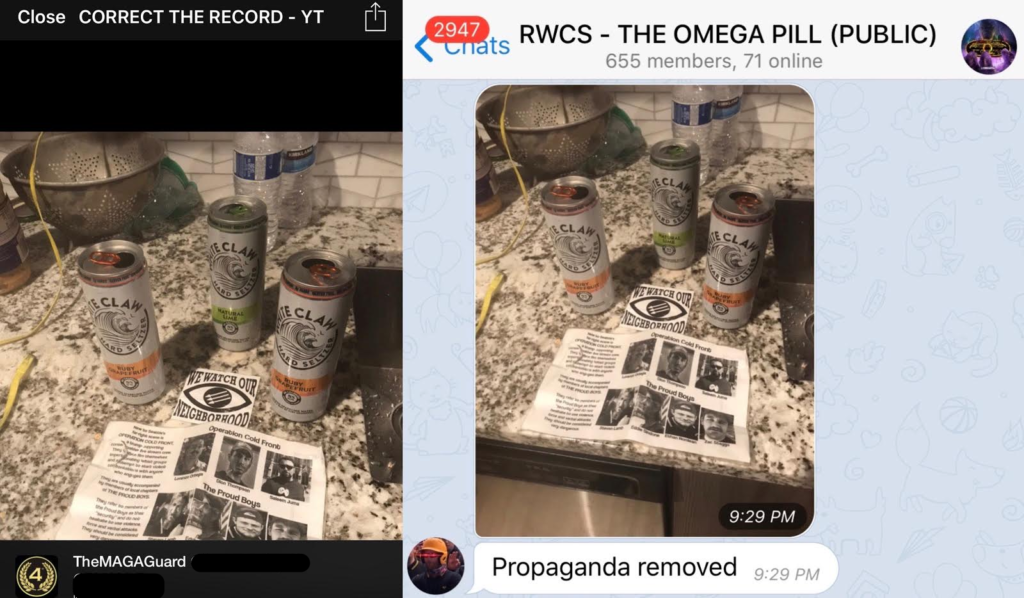 Finally, the current Telegram profile picture for “The Gael” is a picture of himself from the Proud Boy march in Portland on August 17, 2019.

While Sean may have only appeared recently in the right-wing activist scene, Sean’s messages make it apparent he’s been an anti-Semite long before becoming a Proud Boy. When group members of “The Noticers” discussed books such as Mein Kampf and Kevin MacDonald’s Culture of Critique, Sean stated “That used to be required reading lol” and “I read most of that as a child.” He told the Nazi owner of “The Noticers” chat, “Gl pilling me more than I already am”–basically stating that he can’t hate Jews more than he already does. 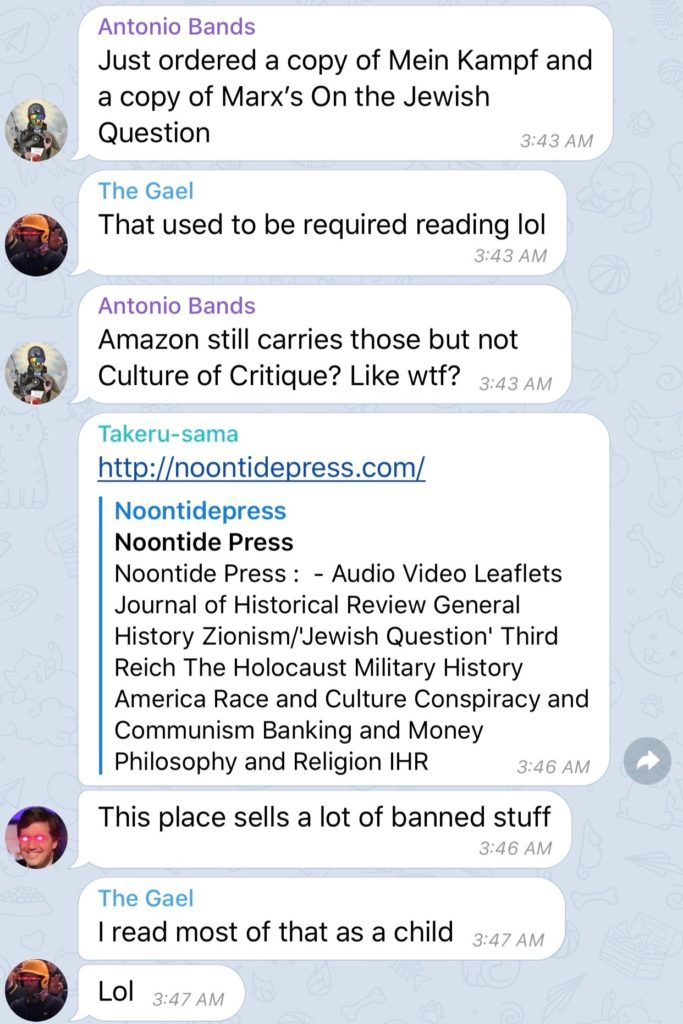 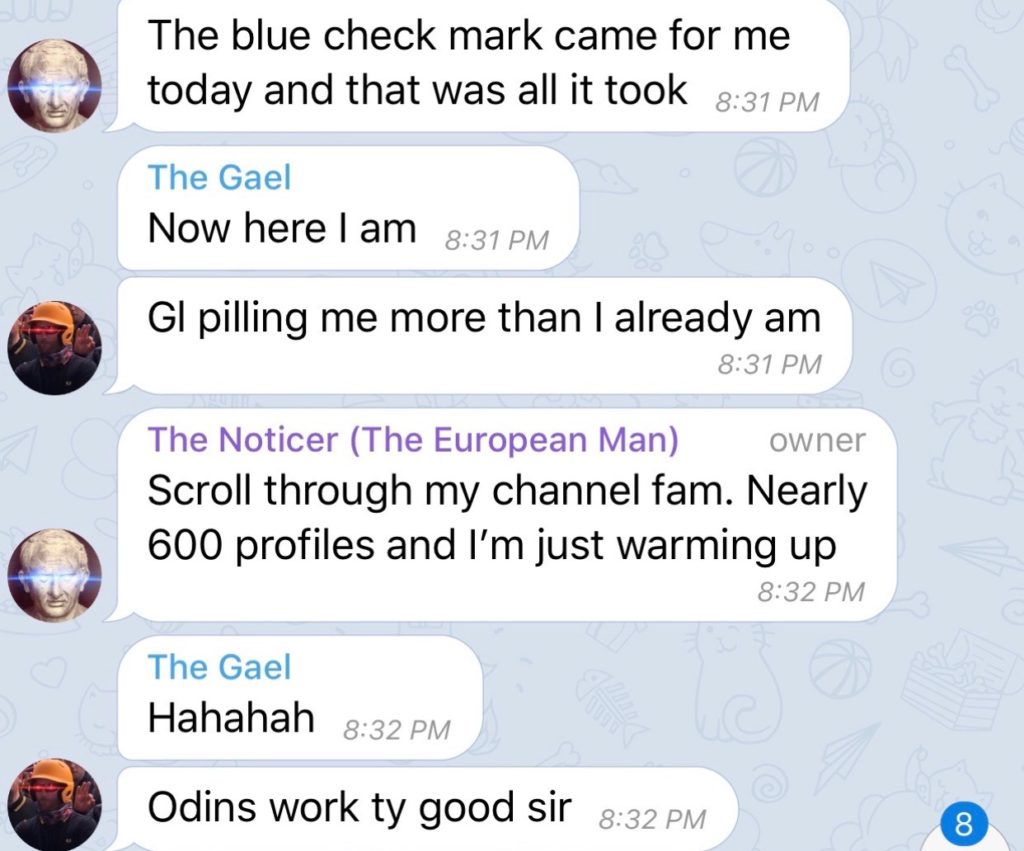 Sean’s Telegram messages are riddled with anti-Semitic, neo-Nazi content. There are far too many to document them all but here are some examples:

Sean is a danger to any community he resides in. Sean is hopeful to spread the message that Jews are anti-white subversives. He actively seeks advice from other neo-Nazis.

Sean is actively making connections and expanding his network to include some of the most notoriously evil Nazis in the United States. As mentioned previously, “Vic Mackey” is a member of “The Noticers.” Here Sean had a conversation with “Vic Mackey” and received an invite into the “Bowl Patrol” chat room:

Sean stated on Telegram “Now I’m an irl (in real life) activist” and that he has “even better connections than before.” He claimed he joined the Proud Boys “cuz the west is the best and we make shit happen.”

Sean’s online and real life organizing must be staunchly opposed.

There is also have a flyer that you can share posterseanscott. 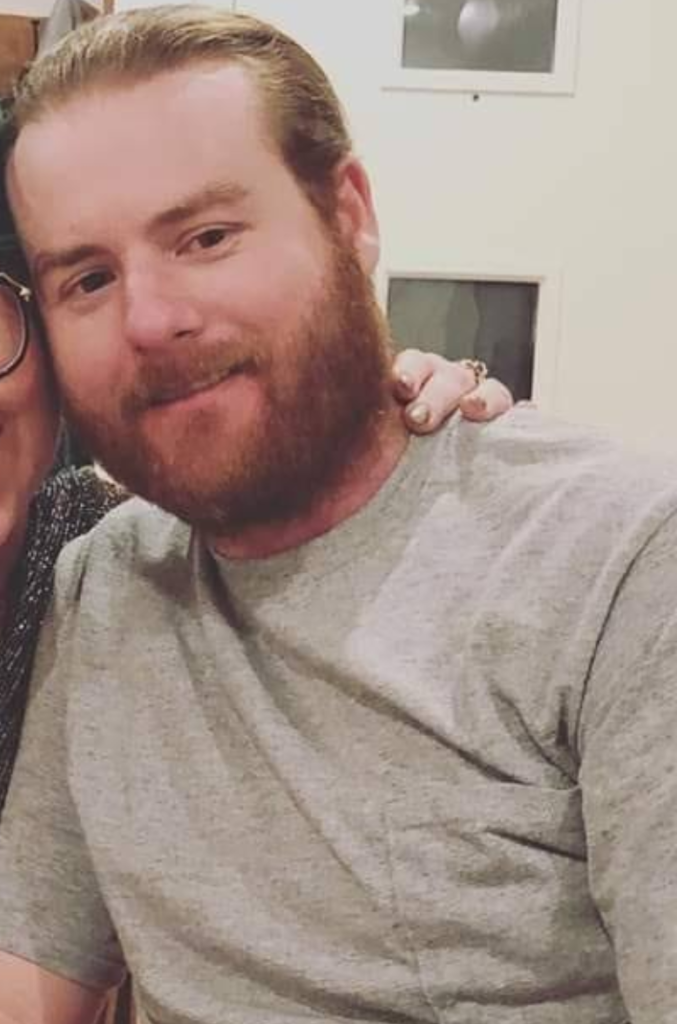