Zachary Thomas Staggs is a Seattle based alt-right provocateur and all-around bigot. You may have seen him around town either providing security for the local far-right livestream crew Operation Cold Front, or flying a sign that reads “It’s Okay To Be White” outside of local events in Capitol Hill and downtown Seattle, or more recently at poorly attended, but well-armed far right rallies that he claims to “organize.” Staggs has said on social media that he is a 4th degree member of the notorious nation-wide street-gang of MAGA-chuds, the Proud Boys. But, he seems to hang on the coat tails of their wannabe counter-parts as opposed to spend time with more commonly known local Proud Boys. While his actual membership might be a fraud, the violent acts he performs in its name are not. 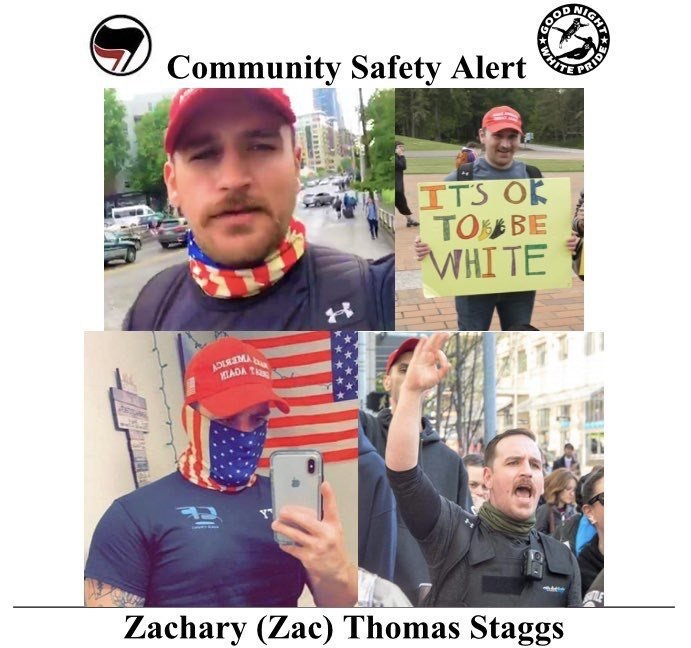 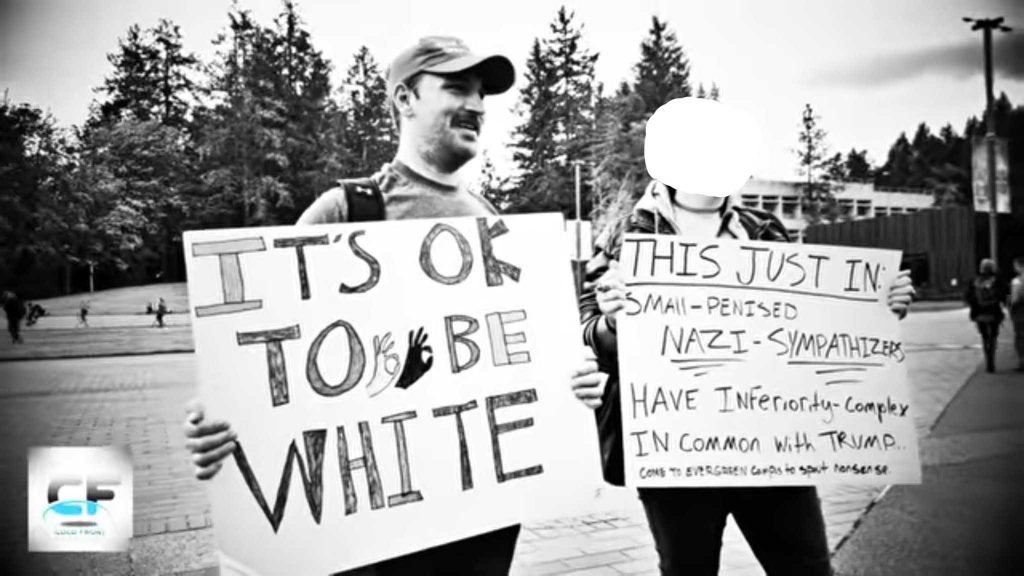 One of the things that makes Staggs particularly dangerous to our communities is not his outlandish mustache or height-driven-complex, but his drive to organize collective action for bigoted reactionaries in the Puget Sound area as well as to carry out physical attacks against those he deems his “enemy.” On more than one occasion Staggs has created an environment where thoroughly abhorrent people, like recently doxxed child abuser and ultra nationalist  Joshua Hanks and roommate Tanner Peterson, rally in the Seattle area. Staggs has sought out every vestige of leftism he can find and attempted to provoke attacks and in fact attacked several people and spaces in an attempt to “red pill Seattle.” So far, it seems to not be working.

His career in street-antics seems to have begun by way of providing security for Seattle-based alt-right trolls Operation Cold Front. OCF first made waves by walking around Capitol Hill, downtown Seattle, as well as the University of Washington campus wearing MAGA hats and holding signs that read “It’s Okay To Be White.” At times they donned poorly made bandana masks, dressed in black and LARP’d their way into pretending to be “antifa” while publicly ridiculing those who engaged them in dialogue through their youtube channel. These attempts were followed up with bigoted, xenophobic and homophobic attacks in the comments sections of anyone they happened to trick into being on camera. Staggs took part in the dog-whistling as well as offered the visible “muscle” necessary for these alt-right clowns to feel safe in attempting to trigger anyone who walked past.

Once these troll-strolls became more commonplace around Seattle, they were more consistently confronted and the live-streamers began to scream about their “freedom of speech.” It’s unclear if they have ever read the 1st amendment, but regardless, this set off a series of “Freedom of Speech” rallies organized by Staggs in the Seattle area. These rallies proved to be gathering points for actors across the alt-right stage, as they drew supporters of OCF’s antics as well as the vile misogynists who regularly show up to protest outside of Planned Parenthood in Seattle’s Central District.

In the middle of the summer of this year, a local event called “Drag Queen Story Hour” began to receive the gaze of the alt-right. Here and in a handful of other cities, the event was picketed by a cross section of the patriot movement in a murky pan-nationalist-2A smorgasbord. Of the people in attendance was aforementioned child abuser and dishonorably discharged veteran Joshua Hanks, consistent Planned Parenthood ogre Steve Lamb and other deeply racist and misogynistic members of the far-right…and Zac Staggs. 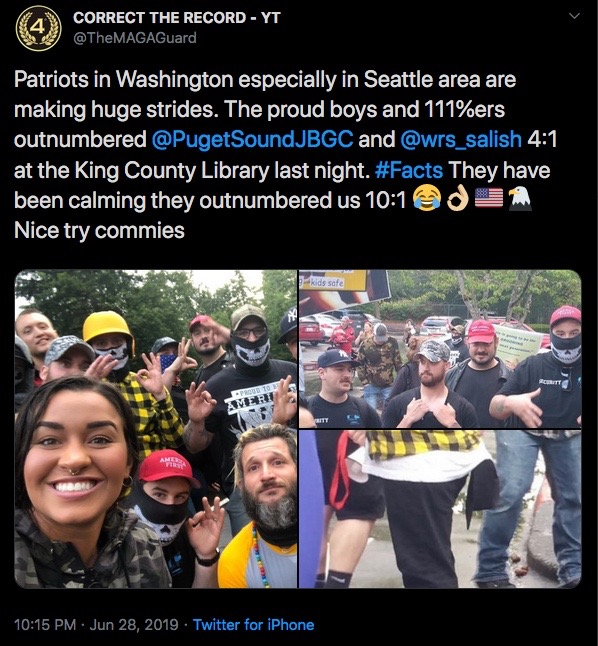 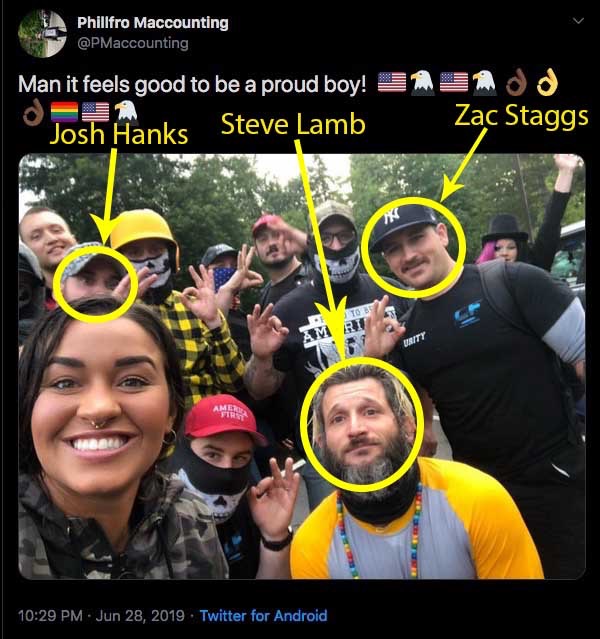 During the Spring and Summer months of 2019, the Capitol Hill neighborhood of Seattle saw a spike in homophobic attacks, as well as routine sightings of Staggs and his buddy Tanner Peterson. Staggs and Tanner would frequent the hill and post bizarre videos on social media about their nights out drinking at “antifa bars” and brag about sneaking into bars under the “antifa radar.” Their most puzzling post featured them tucked away in the corner of Nacho Borracho, sheepishly flashing alt-right hand-signs, crumpling up antifa stickers and drinking them in their beer. Capitol Hill residents and workers were quick to make a connection between heightened violence and the presence of these alt-right goons, and soon Staggs and Peterson had been banned from many bars in the neighborhood without debate.

Besides posting bizarre videos of attempts to threaten members of “antifa,” Staggs and his cronies have attempted, but failed, to disrupt at least one event here over the summer. Upwards of twenty alt-right-types showed up outside of a radical art space in a central Seattle neighborhood with american flags, video cameras, MAGA hats, guns, body armor and one megaphone in an attempt to disrupt an event about resistance to atrocities along the US/Mexico border. The event proceeded nearly uninterrupted which is no small feat given that attendees had to withstand a gauntlet of armed far-right wingnuts spewing verbal and often-confusing insults at them. Later that day this same group of trolls moved their rabble into the Pioneer Square neighborhood in an explicit attempt to provoke a fight with Emerald City Supporters, the Seattle Sounders’ support club. The conflict started with a misguided ban by MLS of the Iron Front logo, which ECS was openly standing in defiance of. Jason Rantz, Seattle-area alt-right mouthpiece, had recently written about ECS’ plans to protest the ban, and decided that meant they were an “antifa terrorist organization.” Staggs and crew showed up across the street from Fuel Sports Bar, where they knew ECS members hung out before games, and were turned away by ECS and bar security when they tried to enter. Completely unsatisfied with their attempt to provoke a fight, Staggs, Josh Hanks, Dion Thompson, Saleem Juma, and others stationed themselves outside of the Century Link stadium, waited until the bulk of ECS had gone inside the stadium, and cornered a lone Sounders supporter and jumped him. Staggs screamed absurd comments at him like “what you don’t like Trump?!” and eventually he and Josh Hanks punched him multiple times while the Sounders supporter was trying to walk away with his hands up to protect his face. One of the other bigots involved put the Sounders supporter in a chokehold until police lackadaisically broke up the scuffle. Shockingly, SPD decided not to arrest Staggs or Hanks. 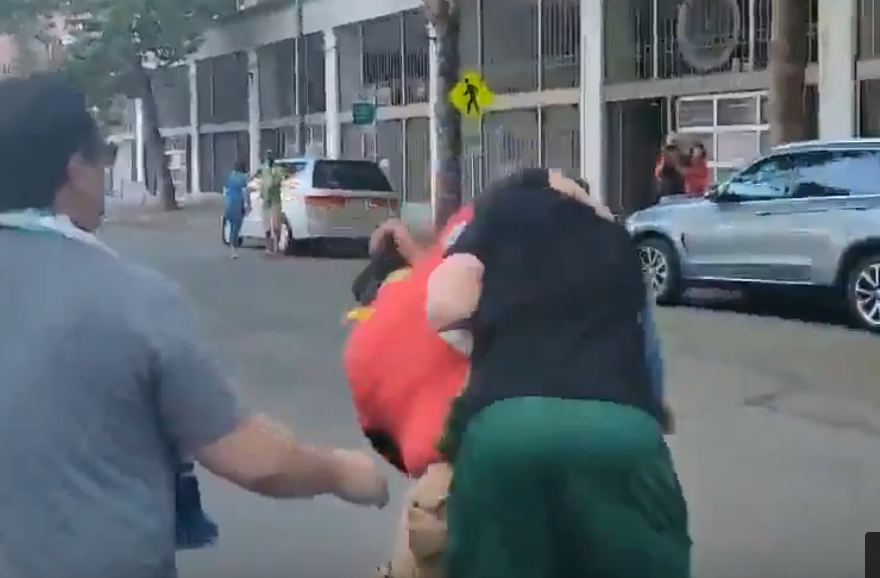 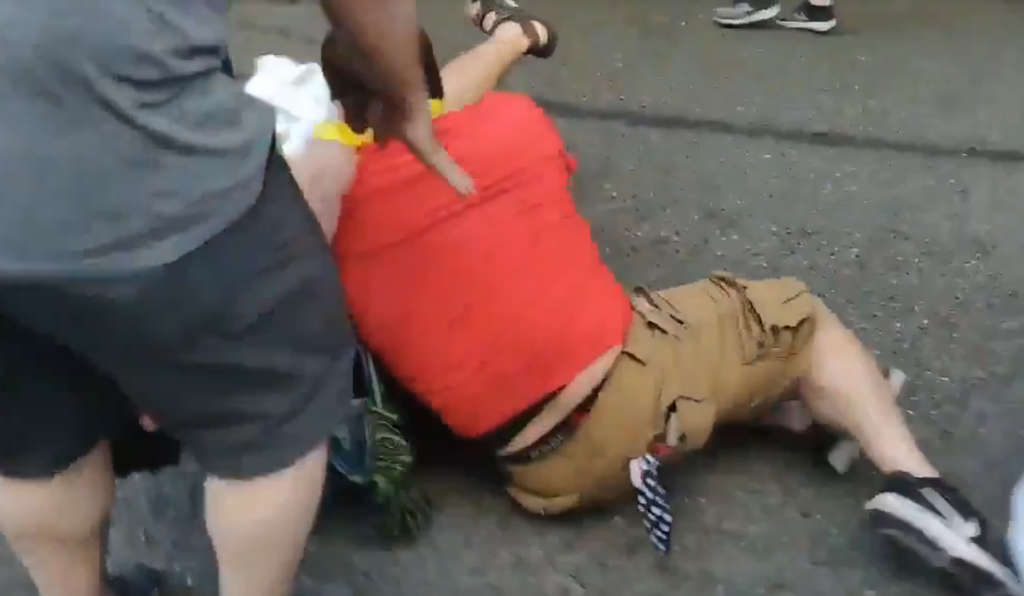 August 17th in Portland, OR was billed to be one of the most violent “anti-antifa” events in the Pacific Northwest, and it very nearly lived up to that hype. Organized by Joe Biggs, possibly the most infamous Florida-man on the far right, the event drew hundreds from around the country with a frenzied and violent social media campaign. Images of Rose City Antifa members getting their throats slit and other such atrocities filled alt-right and Proud Boy social media accounts, until the FBI visited Biggs and he decided to “tone down the rhetoric”. While the shit did not hit the fan that day, literally hundreds of Proud Boys and their ilk descended, once again, on downtown Portland. According to their leaders Joe Biggs and Enrique Tarrio, the alt-right converged on downtown Portland with the explicit intention of running down the city’s financial resources with more rallies to come. Staggs attended this event, and as always, bragged about it on social media. Based on the fact that Staggs had to rent a solo hotel room in the Portland area and not stay with any of the local or other traveling attendees, we are assuming his goal of reaching prominence inside the Proud Boys has still yet to come to fruition. 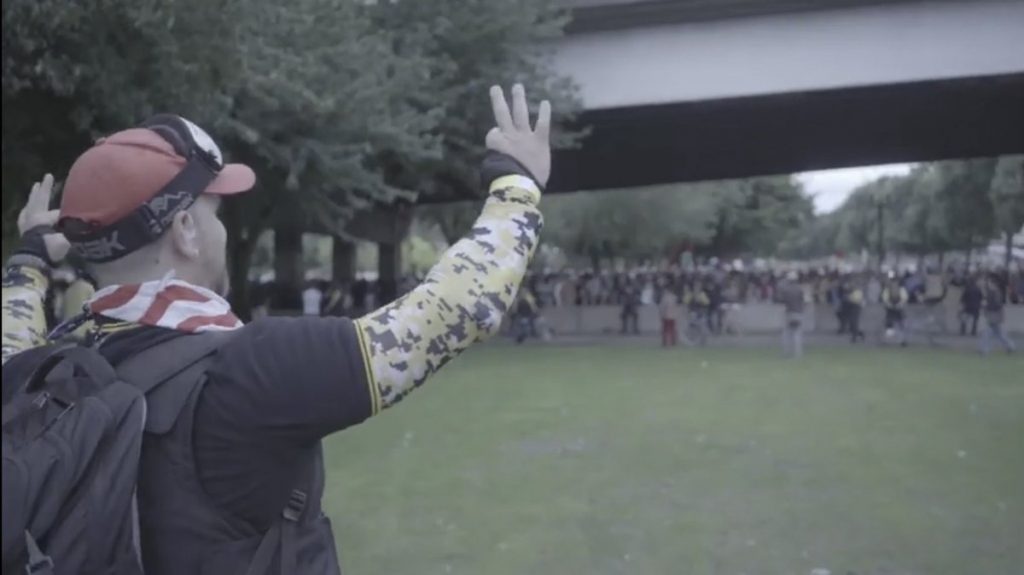 One of the most pathetic attempts at a rally came most recently on August 25th at Cal Anderson Park in Capitol Hill where a crowd of almost 8 alt-righters, including recently doxed child-abuser Josh Hanks and fragile-yet-violent-old-timer Kerry Hudson. After yelling nonsense at those who showed up to oppose their presence in a traditionally queer neighborhood, the gathering of patriots fled with a complete Seattle Police Department escort back to Zac Staggs apartment on 20th Avenue, confirming his residence for all to see.

His presence and attempts at agitation at all of these events is the logical conclusion of extremely bigoted beliefs that Staggs holds and has expressed online. Zac Staggs’ positions run like an amalgamation of contemporary white supremacist values: Islamophobia, misogyny, antisemitism, white nationalism and xenophobia. He seems un-phased by aligning himself both publicly and online with those beliefs, groups that hold those beliefs and violent psychopaths who would do intense violence for those beliefs.

Staggs is a licensed security guard employed by Starplex Crowd Management Services (CMS). He has been known to work on Capitol Hill at Dick’s Burgers on Broadway, but after a community effort to get the violent homophobe out of the historically queer neighborhood his company moved his location. We can only imagine he was re-assigned to guard something of great importance. Staggs will continue to be moved around by this security firm until he is removed from their workforce.

And as a warning to community members on Capitol Hill, Stagg’s last known address was 1806 20th Ave on Capitol Hill. He is most certainly using this space as a launching pad for violent organizing, and has been known to host local far-right members before and after events. Stay safe when in the vicinity. 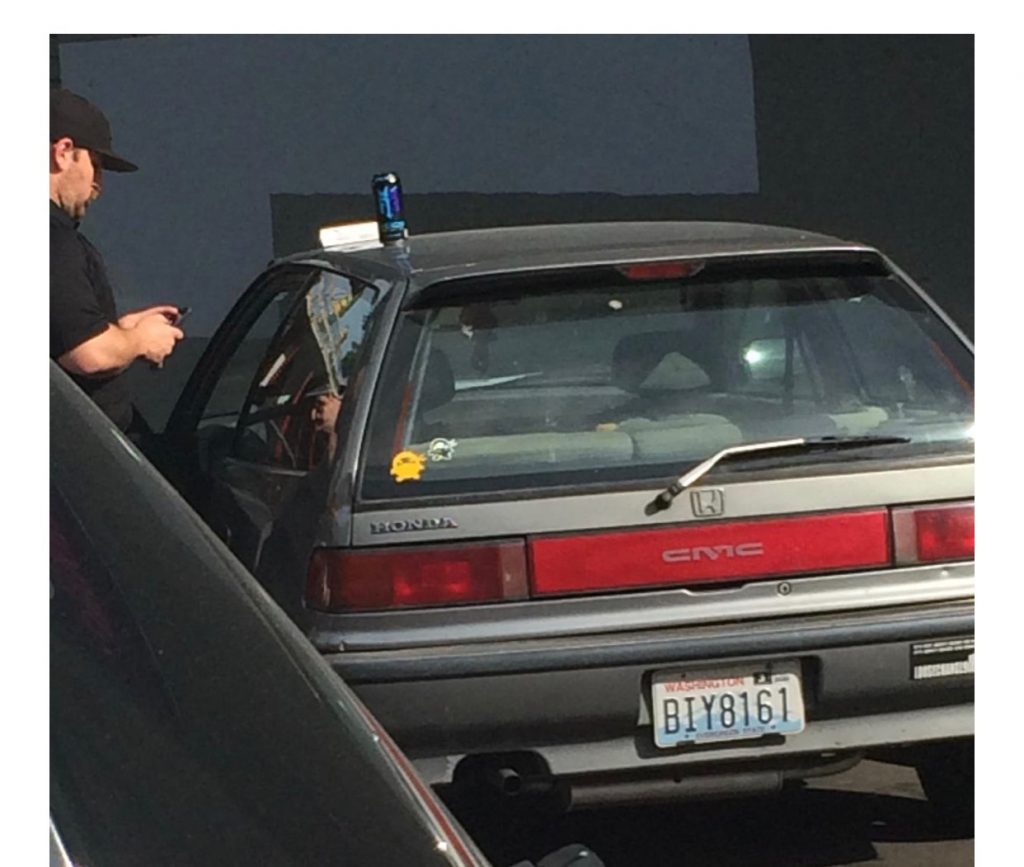