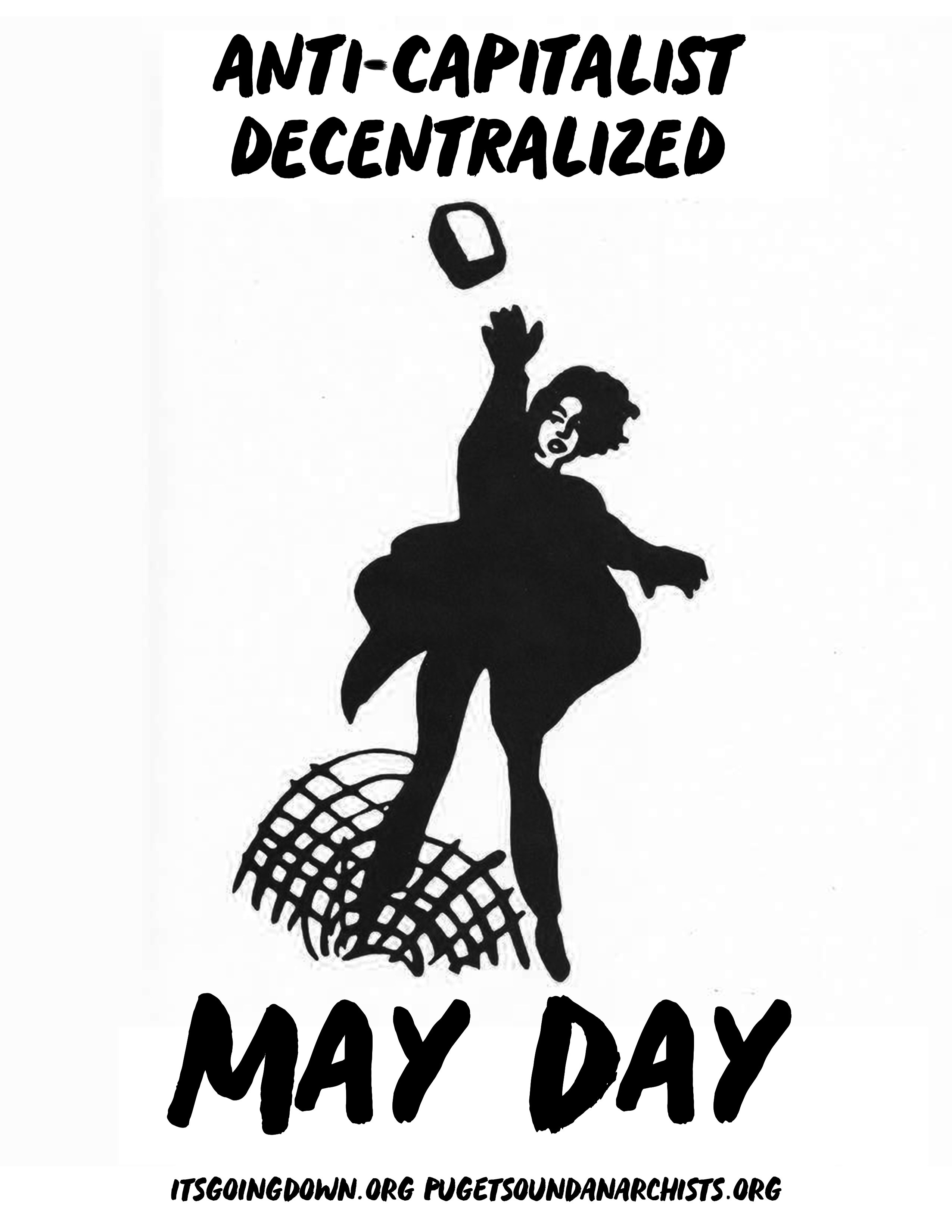 This May Day we invite organizations, crews, and individuals to take the initiative and plan actions reflecting our diverse and interconnected struggles.

In 2018, autonomous organizers on occupied-Duwamish Territory (“Seattle”) put out a call to celebrate May Day in “a coordinated yet decentralized and direct action-based mode of operation.” The call was taken up by a number of local groups and organizers in several cities across the continent. This year, we are reviving the call: towards a decentralized, anti-capitalist May Day!

May Day has always been a global day of struggle from below. In our city we are fighting on all fronts. Tech money and tent cities go hand in hand as every passing day marks one more battle against displacement. Strikes and wildcat walkouts are an increasingly everyday occurrence, from massive hospitals to local coffee shops. Just to our North, Wet’suwet’en land protectors make their unceded lands a vital holdout in the struggle against settler-colonialism and fossil-fueled climate collapse, while the original inhabitants of our own city continue to fight for a basic modicum of recognition and respect.

Keeping all of this at heart, we invite organizations, crews, and individuals to take the initiative. Plan actions reflecting our diverse and interconnected struggles. In 2018, local actions included blockade/picket lines at two Wendy’s in solidarity with a farm-worker boycott, an unpermitted block party outside a construction site run by the Youth Jail’s builder, and a wide range of small actions like banner drops, wheat-pastes, and targeting of gentrifying bike-shares. Comrades down South in occupied Squaxin and Nisqually land (“Olympia”) also joined in with a home demo at the mayor’s house, attacks on banks, and a rowdy surprise march the day AFTER May Day, catching the cops off guard. We also take inspiration from recent transit and anti-police actions on unceded Lenni-Lenape land (“New York City”) which have taken on an overtly decentralized and decolonial character.

It is vital that actions are spread across different times and places. Plan actions outside the over-demonstrated and heavily-policed downtown core. What needs doing in your own neighborhood or, better yet, the suburbs?

Create art, memes, or even trainings and other live events in the lead up to the holiday. Assess your organizing capacity and interests; can you plan something small, unannounced, but packing a punch? Large, publicized, and ready to help draw in new folks? Maybe a mutual aid effort supporting homeless neighbors makes sense, or a shutdown in solidarity with water protectors.

We are very interested in coordinating with as many other groups as possible along these points of unity:

1. Our actions will be undertaken in the spirit of anti-capitalism and anti-oppression
2. We will observe the St. Paul Principals in regard to other actions that happen this day
3. We will engage in direct action rather than merely symbolic action

Finally, we encourage folks in other communities to put out similar calls and plan actions that align with your local struggles!

If you would like to coordinate, please send an email to maydaysea [a t] protonmail [d o t] com, or for less secure communications message @MayDaySea2020 on twitter