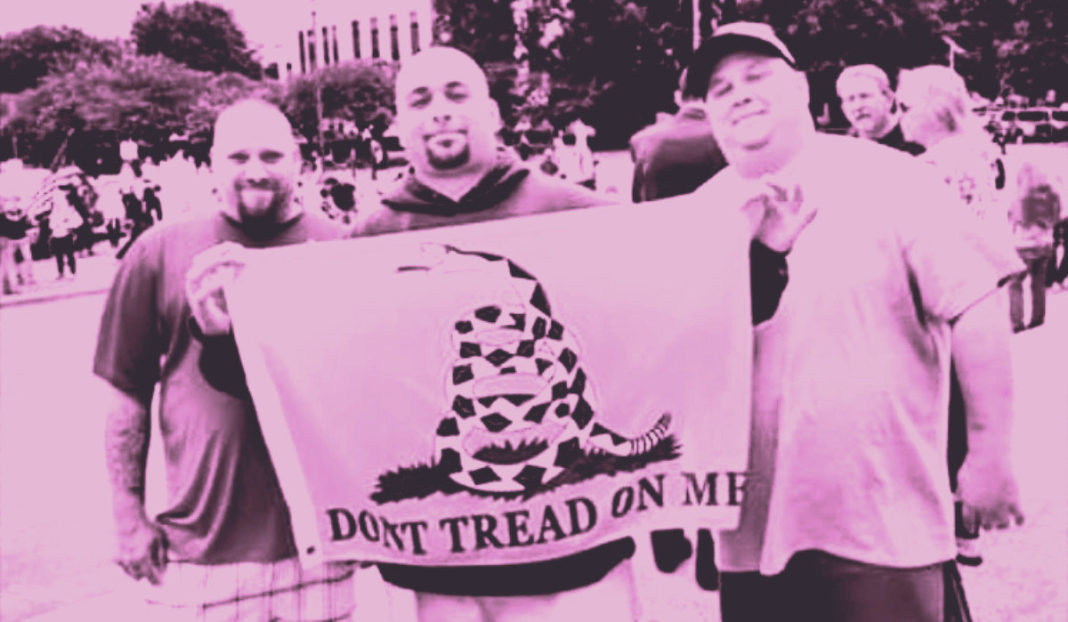 Welcome, fellow antifascists! This week is our first milkshake-free column in a month, but we do have the Oregon GOP aligning themselves with vigilante militias and threatening to shoot cops, the beginning of a new #DoxxingAllYourBoys campaign promoted by comedian Kathy Griffin, and a kickass antifascist gay dance party outside a Drag Queen Story Hour in Pennsylvania. Without further ado, let’s begin!

Explainer: What’s the Matter with Oregon?

There’s always something strange and often racist going down in Oregon, but the latest news is worth noting because it shows the state GOP senators openly collaborating with far-Right anti-government militias like the Three Percent of Oregon and the Oath Keepers, to shut down a major cap and trade environmental bill that was due to become law. Other legislation which was due to be voted upon: gun control, mandatory vaccinations, the availability of drivers’ licenses for non-citizens.

If you aren’t familiar with the Oath Keepers or the III%ers, politically they are largely far-Right, paleoconservative, and heavily prone to embracing conspiracy theories, especially in regards to supposed internal and external threats to the United States that would necessitate an armed militia that can engage in some sort of far-Right uprising. Overall, they are essentially in-line with websites like InfoWars and groups like the Proud Boys. The Oath Keepers were out on the streets of Ferguson and famously split in 2015 after the vast majority of the group refused to support community efforts to protest the heavily armed police. Throughout 2017, both Oath Keepers and III%ers appeared at pro-Trump and “Free Speech” rallies up until Unite the Right, after which militia groups took a black eye for appearing at; later attempting to distance themselves from white nationalists and the Alt-Right. Throughout 2016 and 2017, members of the III%ers were linked to a variety of attempted bombings and sentenced to heavy jail time.

But back in Oregon, our current story all started Wednesday, when eleven Oregon GOP state senators threatened to walk out and deny the Senate a quorum. Governor Kate Brown responded that she would use the state cops to bring them back to Salem to lose the vote fair and square.

Up to that point, this was all politics as usual apparently, or at least politics with a precedent.  See, Brown had okayed a walkout by state Dems in 2001 and Democrats had famously pulled a similar move in Wisconsin against Scott Walker in 2011.  But here’s where it starts to go sideways, when state senator Brian Borquist makes the following threat against the state police on camera.

GOP state senators didn’t show up to work Thursday morning, so Brown called their bluff and directed the Oregon State Police to bring them back to vote. Next, GOP state senators fled the state, and became fugitives in Idaho. Far-Right militia researcher JJ MacNab tweeted that militias were guns up, when this post by Linn County III% lead Paul Luhrs was brought to light by antifascists.

We’ve known since at least mid-2017 that Oregon and Washington state GOP were using Threepers, Oath Keepers, and/or Proud Boys for “security” at events, but this new and open cooperation to shut down the government in order to scuttle legislation is what’s new here.

It’s also apparently extremely bad optics, which is why we haven’t seen nor heard from the Threepers since Friday, when Senate Republicans were forced to disavow the militia’s offer.

Although the GOP state senators had to distance themselves from the trigger-happy militias, the state cops may well have known the militias’ intentions better, because they recommended calling off Saturday morning’s special legislative session in Salem.

Maybe a dozen chuds showed up on Saturday, and then on Sunday the @OregonGOP Twitter admin thought it would be funny to post a picture of hundreds of people on the Capitol steps, making it look like an occupation could indeed be taking place. The reality was that this photo was from a previous week’s protest, and that maybe 75 people showed up to the capitol, sang the national anthem (badly) and “America the Beautiful” (even worse), and then left.

As of the time of this writing, GOP Oregon state senators are still in hiding.

This collaboration represents mainstream conservatives willingness to align themselves with far-Right paramilitaries, should it serve their political agenda. However, the ‘anti-government’ ideology of the militias should not be confused with an anti-state agenda. The militias don’t hate the state, just some of the people who currently are elected into power.

They see themselves as the legitimate defenders of the American Constitution, while they view the current regime as having betrayed their oath to defend the US “against all enemies, foreign and domestic.” Hence the name, the Oath Keepers.

The Three Percent of Oregon named themselves as a legend that only 3% of Americans participated in the American Revolution, and view themselves as the natural successors of the Founding Fathers.

The militias often recruit from current police and military, and often have ties to further Right hate groups. Below, see a video of Three Percent of Oregon Linn County Lead Paul Luhrs at an event with the Proud Boys, a hate group that has staged a number of attacks across the Pacific Northwest alongside Patriot Prayer.

For a more in-depth look at the Oregon militia movement, see Spencer Sunshine’s 2016 Up in Arms: A guide to Oregon’s patriot movement, available as a free PDF from Political Research Associates.

for the rest of this column which continues a report that focuses on other parts of the country, feel free to visit the original post on It’s Going Down