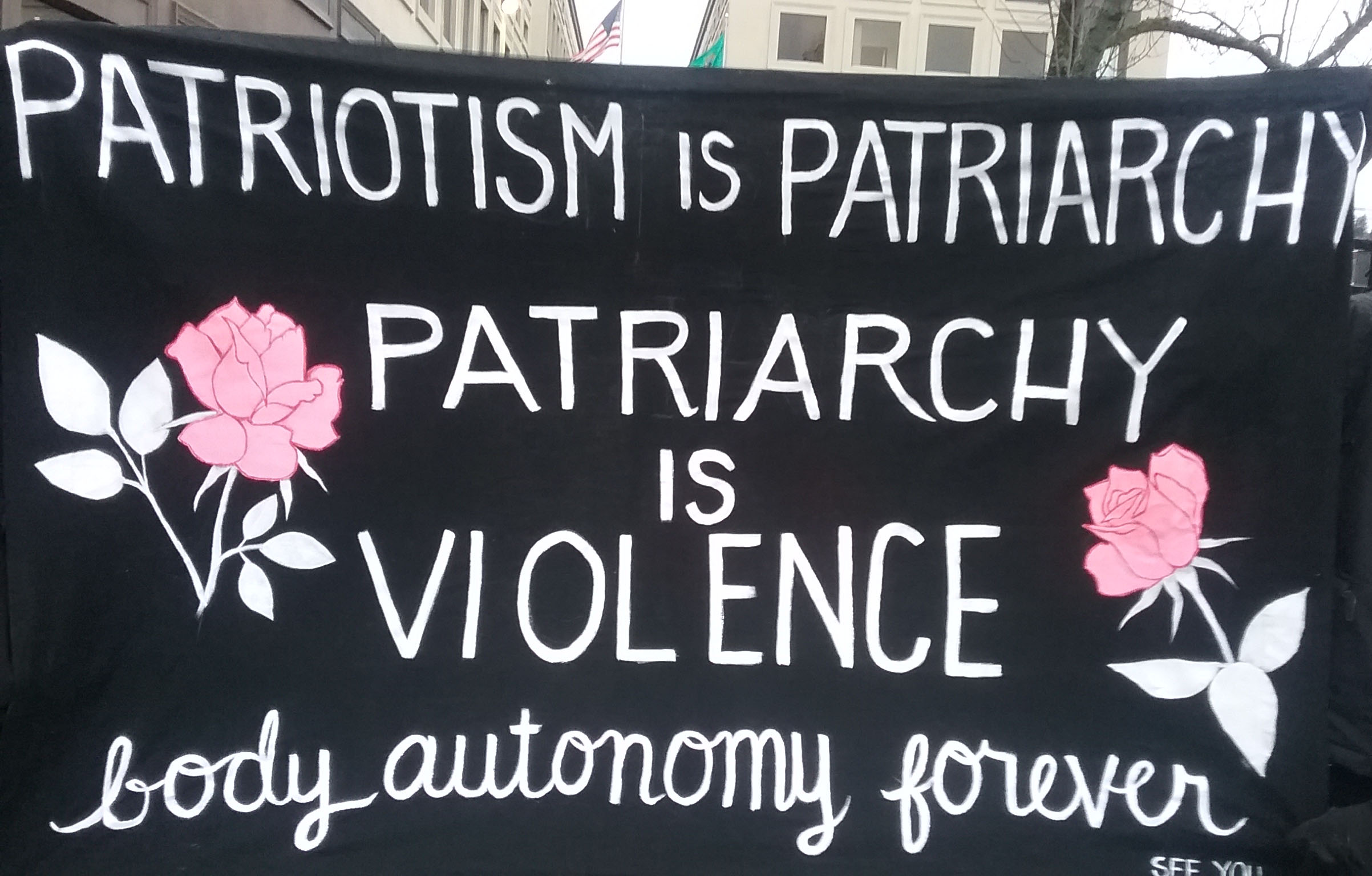 For the second week in a row Patriot Prayer promised that they were going to show up to “defend” the anti abortion christian fundamentalists who hang around outside Planned Parenthood. “Tiny” Toese claimed that he was going to show up at 8am. In response, anti-authoritarians, feminists, and others upset about the Right’s attempts to control bodies and deny access to health services showed up to respond early this morning on February 2nd.

A few crews showed up at around 7:45 am holding a banner that said “Patriotism is Patriarchy. Patriarchy is violence. Body Autonomy Forever” and another banner that read “Smash Nationalism – Queers Fight Back” A sound system boomed playing everything from Britney Spears to The Dead Kennedys , and the crowed quickly grew to around 40. 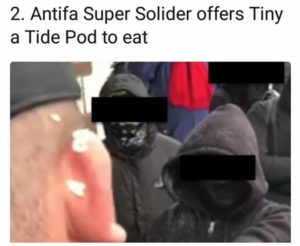 Shortly after 8 AM Robert Zerfing and Tiny showed up and waited by their car, nervously checking their phones. Had their Western Chauvinist pals flaked on them? Eventually a few more of their lot showed up and they proceeded to stand kitty corner to the clinic. Several anti-authoritarians went over and started engaging with them verbally hoping to keep them away from the clinic. This went on for some time, until Robert Zerfing started trying to grab an umbrella out of someone’s hand. In the ensuing chaos Robert Zerfing was covered in glitter and Tiny’s appearance was improved by the judicious application of silly string.

The Proud Boys’ entire identity balances on a desperate attachment to masculinity. You could see in Tiny, Robert, and Russell’s eyes that the gay from the glitter and silly string was starting to seep in and they couldn’t stand it. Tiny proceeded to cross the street, chest puffed out, clearly enraged by the silly string saying, “spray me again I dare you!” Robert Zerfing and the rest followed and a crowed met them at the corner to keep them away from the entrance. All were covered in more glitter and silly string.

Since these patriot fools clearly have a hard time distinguishing fact from fiction, people began offering them Tide pods and other delicacies. Unfortunately, none of them were man enough to try the Tide Pod Challenge, so they were simply pelted with them instead. It’s hard to look manly when you’re dripping with silly string and glitter, so it’s no surprise that they couldn’t handle Tide pods either.

Robert Zerfing re-affirmed his defense of Jeremy Christian, but it became hard to hear his twisted justifications for a racist murderer because his face was quickly covered with silly string. Let this be a lesson for all those trying to “dialog” with Proud Boys, Patriot Prayer, and their ilk: they’re always happy to give a platform to white nationalists, and happy to defend them after their violent rhetoric turns into assault and murder. Their mouths can only make ugly noises, so we may as well beautify them with glitter and silly string instead of listening to their garbage. Due to some unknown glitter allergy, Robert’s nose began bleeding at some point, and he truly looked the par of a dignified patriot: silly string in his hair, glitter on his face, and blood dripping from his noise. A Proud Boy indeed. Meanwhile, Tiny grew angrier and visibly trembled with rage as people covered him in silly string and teased him for being a proud boy. It was clear that he knew he shouldn’t start the fight because of his current legal predicament. He was almost in tears from the effort.

The gaggle of anti-choice conspiracy nuts eventually tired of the silly string and mockery and retreated across the street, where they were pelted with eggs and tide pods, and graciously offered gallons of milk to soothe their bruised egos.

Anti-authoritarians handed out fliers from the week before, as well as a page detailing some of the members of patriot prayer and their affiliations.

The rain worsened and Patriot Prayer and supporters looked cold, wet, and embarrassed. Their

fearless leader, Joey “Spicy Glitter” Gibson, had failed to appear and they had been mocked and ridiculed in the rain for two hours. They got back in their cars and headed home. Shortly after that Tiny posted a video promising to be back at Planned Parenthood next Friday. Please be prepared to come next week as well and let these creeps know they’re not welcome in Olympia.

Anti-authoritarians milled around for a bit longer waiting to see if the Proud Bigots would return, and then began to disperse. As the numbers thinned the police–who had kept their distance through out the confrontation–walked towards Planned Parenthood in a group of three on foot and began questioning people about an alleged incident with an air-horn. Some pigs then entered a nearby coffee shop and approached people, accusing one of them of blowing an air-horn. Its unclear what the pertinent charge would have been for this alleged action but the person did not respond and the police left. 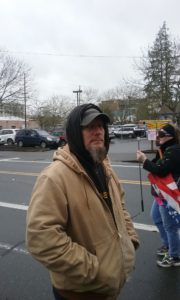