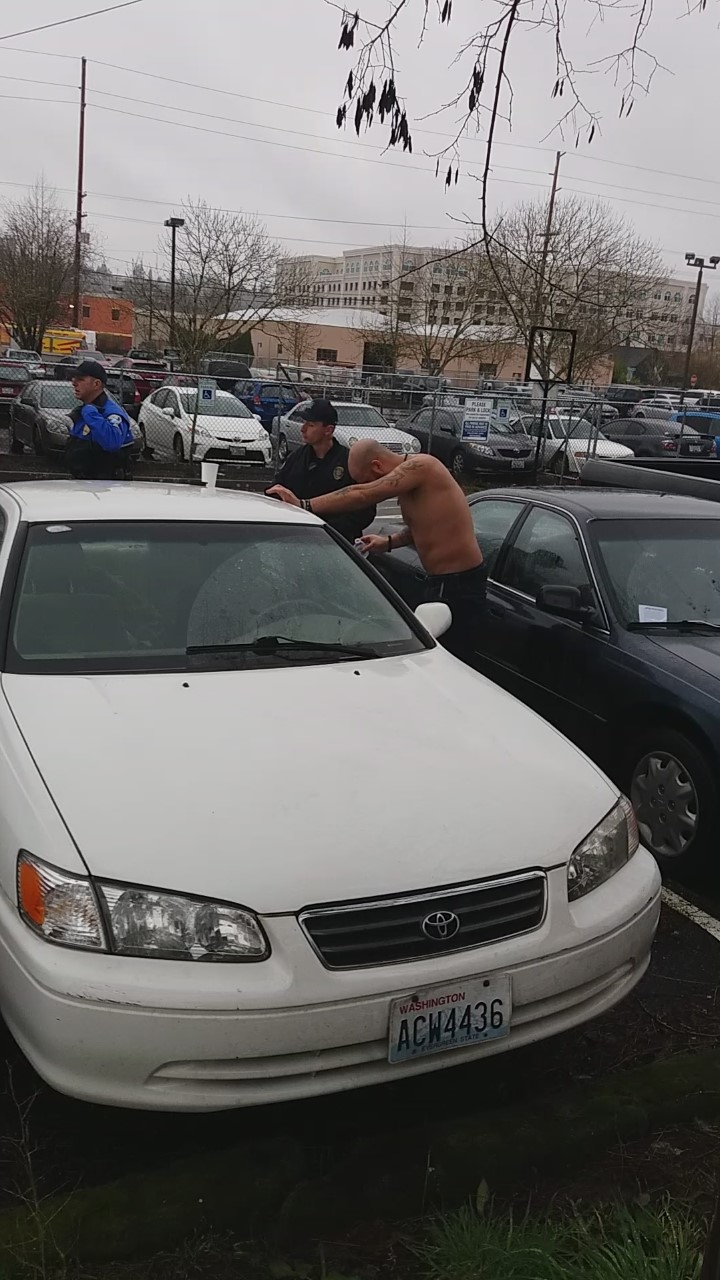 When Joey Gibson announced his intention to bring Patriot Prayer to protest Planned Parenthood in Olympia, we knew we couldn’t let them go unchecked. It’s not enough for Joey and his scumbag friends to spout racist and nationalist rhetoric; they also have to attack our reproductive freedom and our access to healthcare.

Unfortunately for them, people from Olympia and Tacoma mobilized to defend Planned Parenthood and show that Patriot Prayer’s vile hate won’t be allowed here.

On January 26th at around 9am a group started to gather outside Planned Parenthood. At first just one person held a sign saying “we support Planned Parenthood” while the four fundamentalist Christians held various signs equating abortion with murder. This scene repeats itself in Olympia several times a week outside the clinic but on this day Joey Gibson of Patriot Prayer had promised to come out to protect the anti-abortion protesters. On a facebook live video he had claimed that the anti-abortion protestors were being harrassed by, “gay communists.” This claim is of course absurd on several levels; some of us are gay communists, though probably gayer and more deeply communistic than he understands, and the entire purpose of the Christian fundamentalists presence outside Planned Parenthood is to harass patients going into the Clinic.

When our numbers grew to about 15 people most of the anti-abortion sign wavers thought better of it and left. One older man stayed and some people stood in front of his sign to so it couldn’t be seen by traffic. Kathryn Townsend then showed up to “protect the older man’s free speech.” People started arguing with her as more pro-choice and antifascist protestors showed up swelling to 50 people. Kathryn Townsend, from Gig Harbor, is a well-known Patriot Prayer supporter and wore a patriot prayer hoodie. Responsible for fundraising for that group and other far-right groups, she makes regular appearances at alt-right events and claims that Heather Heyer deserved to get murdered in Charlottesville.

At around 10 AM, a car with members of Patriot Prayer showed up, including Tiny, Russell Schultz, and Robert Zurfing. They showed up and aggressively asserted their love of free speech—as long as it’s the kind they like. Anti fascists started chanting and reminding Patriot Prayer of their various defeats over the last year. Joey Gibson showed up separately shortly after and approached the crowd. Triggered by someone shining a flashlight in his eyes, he reacted by lunging toward the crowd and was quickly covered in glitter and a light dusting of pepper spray. Melting like the alt-right bro-flake that he is, Joey stumbled back to his car and took his shirt off with tears streaming down his face. He quickly called on the Daddy State for help, which arrived in the form of cops and paramedics to hold his hand and soothe his bruised ego and tear-filled eyes.

Meanwhile the anarchists and gay communists across the street offered taunts like, “uh oh Joey needs some milk,” and, “hows that spicy glitter treating you?” and chants of, “Cops and Klan go hand in hand,” while the Olympia Police comforted the shirtless man-baby. One person in our midst began reading aloud the pamphlet included below titled “For Health Autonomy and Reproductive Freedom.”

The four remaining alt-right douchebags yelled back at us claiming that they have nothing to do with fascists and that we are the real fascists. Many of us responded by reminding them of their friend Jeremy Christian who murdered 2 and critically wounded another on a max train in Portland after they intervened in his Islamophobic harassment of two young women. After attempting to disavow Jeremy Christian’s well-documented association with Patriot Prayer, Robert Zerfing (who identified himself as a proud boy) changed tack and loudly proclaimed that Jeremy Christian was acting in self defense and that he would be found innocent. Anti-fascists challenged him on this and he repeated his blatant defense of a neo-nazi indiscriminate murderer. He was then covered in glitter and silly string and retreated to check on his crying friend across the street.

Protestors remained outside Planned Parenthood for a while then dispersed without incident.

The main antagonists present were:

the text of the flier:

FOR HEALTH AUTONOMY AND REPRODUCTIVE FREEDOM

Right-wingers love to talk about life, but all they really believe in is control. They want governments to control the bodies of other people. They want to take away our ability to decide what to do with our bodies. They want to decide who gets to be where. They want to keep us in these narrow boxes of “man” and “woman”, to punish those who stray outside the boundaries, and to take away freedom and health care for those they call “women.” They want violence, harassment, and death from lack of reproductive health care.

And if fascists or proud boys or patriot prayer or any- one else turns up to harass the patients and clinicians at the few places we can obtain meaningful health- care, we’ll be there to fight them off.

AGAINST FASCISTS, SEXISTS, AND THEIR FELLOW TRAVELERS

Patriot Prayer are fascist-enabling scum. Joey Gibson and his band of hate-mongering “street preachers” spend their endless free time traveling up and down the West Coast spewing racist, patriarchal bile. While they claim to only believe in “love” and “free speech”, they loudly proclaim their anti-immigrant, racist, sexist views, attack anti-fascists, and befriend well- known neo-nazis and white supremacists. Joey Gibson and Patriot Prayer frequently associated with Jere- my Christian, the white supremacist who murdered two people in Portland last May after harassing two young women of color. They actively collaborate with neo-nazis and white supremacists to organize events, and then brag later about beating up counter-protest- ers. Joey Gibson claims he was asked by the regular band of anti-choice protesters in Olympia to come and help this Friday. Anyone who asks Patriot Prayer for support should know that they are asking well-known racists and fascist sympathizers for assistance. for more context see: