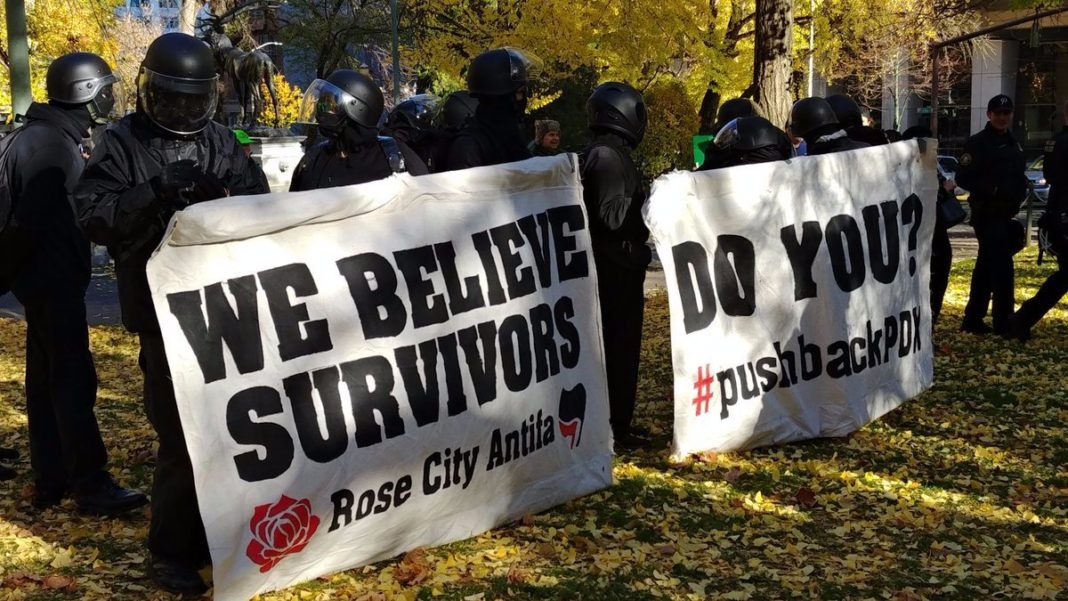 Report from Rose City Antifa on the recent #PushBackPDX mobilization in Portland organized along with PopMob.

Turnout for our event was in the hundreds, helped by the support from groups such as Pop Mob and the DSA. The Patriot Prayer rally drew around 40 people. The police presence was large and obviously intended to enforce Portland Mayor Ted Wheeler’s proposed ordinance which was voted down last week. The ordinance would have given the mayor the power to designate time and place for protests between groups with a history of violence. Despite the fact that the city council voted it down due to its’ unconstitutionality just days before, Portlanders who came to protest the presence of white supremacists and misogynists in their city, were prevented from protesting in public parks and even on public sidewalks. Those who stayed were faced with threats of physical violence from the police and arrests. The small group of ultra right fascists were protected by police as usual.

As far as attendees at the Patriot Prayer event, turnout was low and attendees were predictable. Haley Adams, organizer, rape apologist and white supremacist. Billy Sessions, leader of the Arkansas based Hiwaymen, flew in to spew anti-semitic conspiracy theories. White nationalist Edie Dixon got up on the mic to spew anti-semitism and misogyny. Joey Gibson spoke early on, saying that they would “march in Vancouver tonight,” no doubt after realizing that they were very outnumbered. By 5:05 Gibson posted on facebook that the march was canceled. ‘Tiny’ Toese was also in attendance, ever present at events where he may have an opportunity to assault people attending the protest or even those just walking around the city.

As the numbers dwindled, police chased antifascists (and media) around the city giving conflicting orders and deploying flashbangs.

We are glad that there were minimal arrests, and that the injuries of a few months ago, when police sent people to the hospital with head injuries were not seen. We were heartened again to see substantial turnout on a Saturday afternoon when undoubtedly Portlanders would rather be having fun. Thank you to those who showed up, helped get the word out, donated time and money, and assisted in any way. Solidarity!