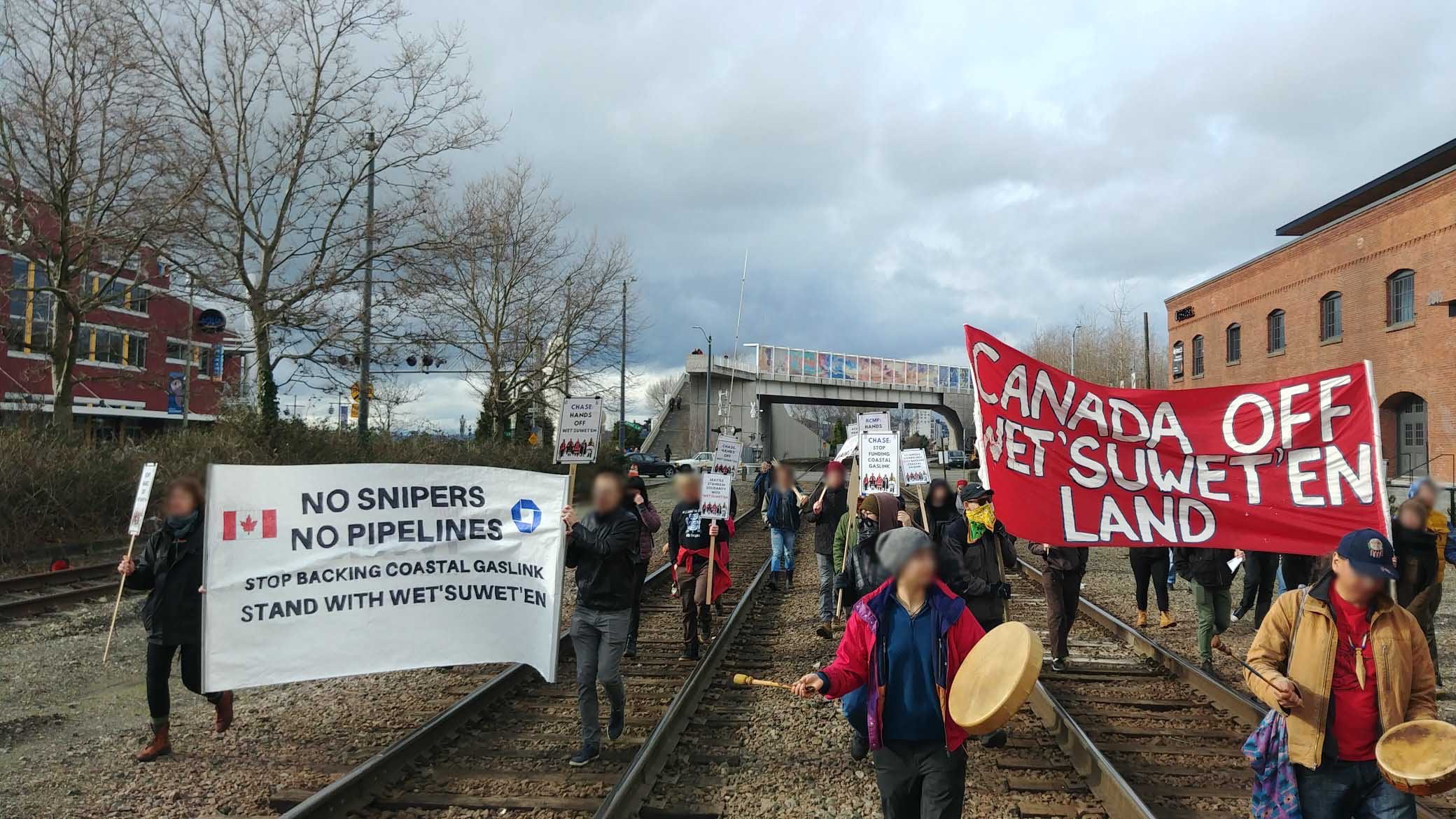 On a sunny Sunday afternoon about 50 of us gathered in occupied Duwamish territory to blockade BNSF railroad tracks along Seattle’s waterfront at the railroad crossing of Broad St. & Alaskan Way in a show of solidarity with the Wet’suwet’en Nation and countless others who have been fighting Canada’s drive to force Coastal Gas Link’s gas-pipeline by way of police (RCMP) force. Our intentions differed from that of opportunistic NGOs; our aim was to cause as much economic disruption as possible without a single arrest.

We arrived on the railroad tracks just after 1:00pm with banners, signs and songs. A train with containers had just passed before we arrived, confirming to us that capital moves 24/7 and that we would be given our chance to clog one of its many arteries. Many of us expected a quick and brutal police response, as is the Seattle Police Department (SPD) reputation. It wasn’t 15-20 minutes however until the first police officers pulled up in a car, spoke with one person to ask what was going on, and promptly drove off. We continued blocking the tracks and the atmosphere was jovial; everyone was talking with each other and laughter could be heard as we nervously waited to see what the police would do.

Over the next 30 minutes, police on bikes slowly began to gather on the sidewalk next to the tracks, but they remained fairly hands-off. We could see a train stopped on the tracks pointed in our direction and it became clear that we were impeding train traffic, a small success but a success all the same. Because this was a solidarity action, we decided to try to move down the tracks to get a photo of us right in front of the train. A squad of bike cops had amassed, and they blocked us from continuing down the tracks towards the train. This line of BNSF rail runs along a heavily trafficked street in downtown Seattle with the touristy waterfront, so we simply walked down the sidewalk to the next crossing. SPD rode their bikes down the tracks and blocked our access again, but now it was the cops that were blocking the train, not us. 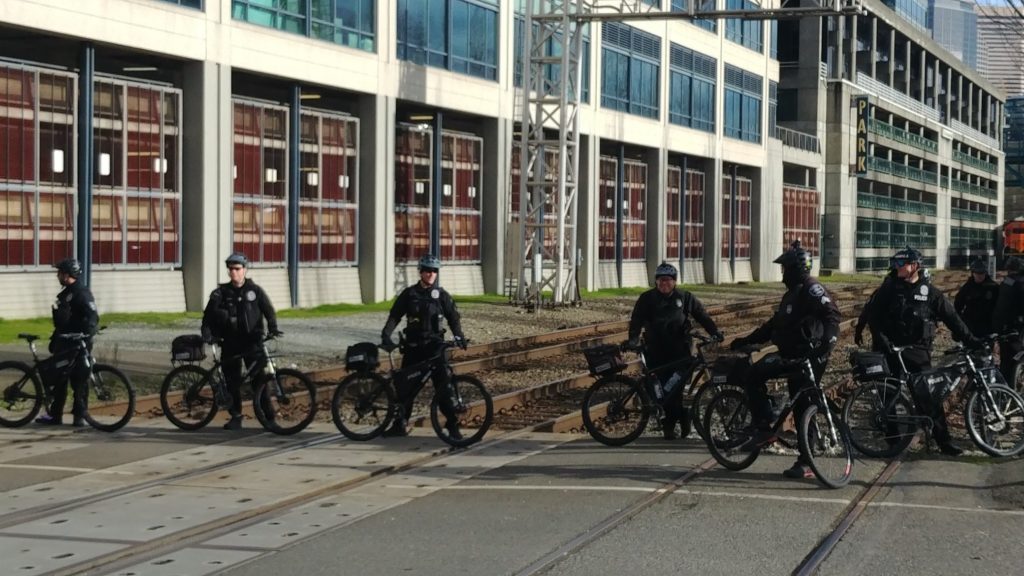 We made it to the next crossing and held space on the tracks again, chanting “No pipelines, no invasion, Stop colonization!” Holding space in a semi-confrontational way, showing solidarity with the struggle for Indigenous sovereignty up North and abroad, singing and chanting, all of these things have felt impossible in Seattle for the last couple of years. We were allowed a brief moment of conflictual joy with friends and strangers alike. We laughed at the idea of the cops blocking the train for us.

The police issued a dispersal order, so we slowly packed up and moved back to the sidewalk, singing and chanting, eventually dispersing ourselves. We successfully stopped BNSF traffic for an hour and a half. While many have used this tactic as an act of civil disobedience, holding out as long as possible until inevitable arrest, it was exciting to see what was possible with as little physical contact with the brutal SPD as possible. SPD’s crowd-control strategies over the years have put a stranglehold on our abilities to mobilize in the streets, resulting in a block of our imaginations as well. But today we experimented with what is possible with a word-of-mouth demonstration of solidarity. Not everything needs to be on the internet, we can successfully organize ourselves in ways that do not immediately invite the militarized hand of police repression. 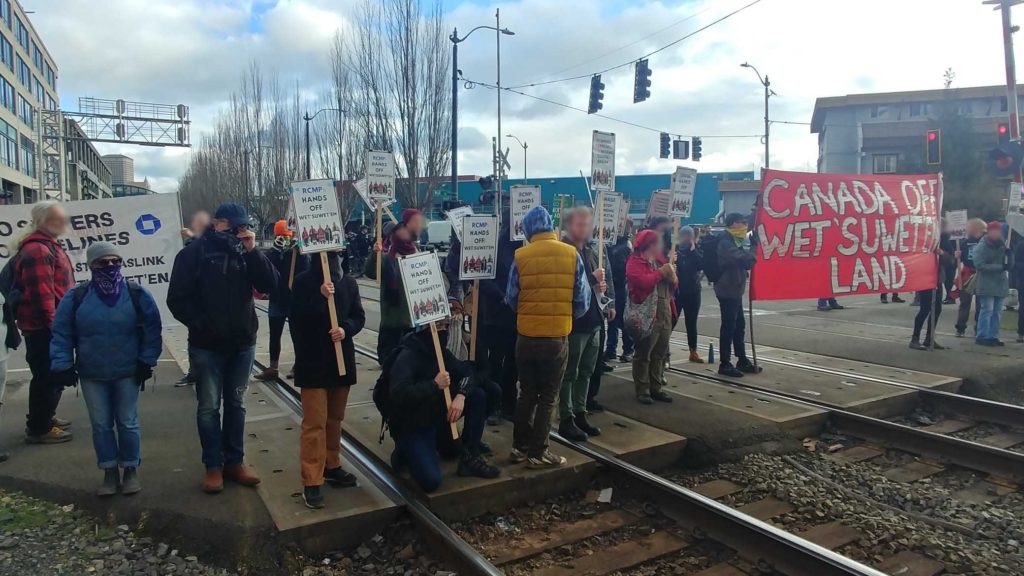 Capital is a global phenomenon, and it moves over and through borders as such. The idea that we can’t show solidarity because we’re not in Canada is false. With the announcement that Canadian cargo has been re-routed to U.S. ports due to ongoing disruptions, we now know that this struggle can be opened up across the U.S.-Canada border, and beyond.

In solidarity with the Wet’suwet’en nation, all of the rail and port blockades across so-called Canada, and everyone taking to the streets. This is an important moment in anti-colonial struggle, and it will pass us by if we fail to grasp it.

-some anarchists from occupied Duwamish Territory

(We borrowed some pictures from social media and blurred out the faces. While this was largely a safe event, we find it important to protect people’s identities from police and vigilante harassment whenever possible. This is very easy to do, either with a pirated copy of Photoshop or with a free mobile-phone app called “Photo Editor”)