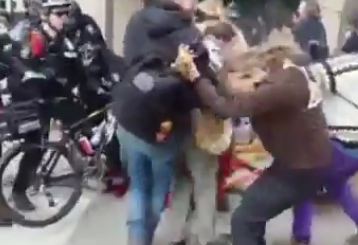 On February 23rd, 2020, the indigenous oriented land and water defense group known as Protectors of the Salish Sea were performing a prayer walk, on occupied Duwamish land, in solidarity with the struggle of the Wet’suwet’en in so-called Canada. The Wet’suwet’en maintain nonsurrendered land which is currently threatened by a purposed inherently toxic oil pipeline.

As the Protectors of the Salish Sea and their relations walked, sang, and drummed in a good way they were met with harassment and intimidation by officers of the Seattle Police eventually reaching a peak where the police attacked the group making arrests, using their bikes as weapons, and soaking prayerful people with pepper spray. This horrendous action on the part of the police, in the broader scheme of things, did not come as a surprise to the water and land protectors who are well aware of the cop’s violent role in colonial repression, but such events are traumatizing all the same.

Today the Protectors of the Salish Sea were viciously attacked by the @SeattlePD while peacefully protesting in solidarity with the Wetʼsuwetʼen tribe. pic.twitter.com/GoarQjRo9N

This attack brought tears to our eyes and anger to our hearts. It marks a continued escalation of SPD’s violence as they become more and more emboldened by, ex-prosecutor and represser extraordinaire, Seattle Mayor Jenny Durkan and their new viscerally reactionary guild boss. Using tragic shootings as an excuse while ignoring their own they’ve managed to increase the intensity of their occupation in the down town area. SPD are doing wheelies in the middle of the street and shoulder checking people adding to an already oppressive atmosphere. Not long before those shootings SPD attacked anti-fascists after an officer tripped over his own bike. All this comes as their department is hemorrhaging members leaving only the most mercenary and fanatic cops. They continually attack and demonize the poorest and most marginalized among us with near impunity. While we don’t believe in punishment we certainly believe in doing what is needed to stop them and neutralize the systems they uphold.

This also marks one more example of repressive violence against indigenous people by the state attempting to practice their prayer or defend the earth from destruction or, in the case of the wood-carver who was murdered by Seattle police, for existing while native and existing while poor. The police are crucial to policing and colonization and not just white police, but police from racialized communities as well. Is it any wonder that there is more police violence in the darker and poorer areas of Seattle?

According to the cop’s own statistics, Seattle today has less assaults and non-police violence downtown than ever before. Certainly less than the 90s as some reactionary rock stars and NIMBY boomers have been claiming. May Cobain’s ghost come for them. Notice how it’s always the business owners, the bourgeoisie, and the police whose narratives they show on the news or that comes out the mouths of politicians. The fight against the Law and Order brutality pushed by the police and the owning class are overlapping with land defense. They are struggles against deadly and toxic capitalist developement and state control.

To the death-machine and its enforcers, and to our friends we say, “ya basta.” We also say “water is life.”

We would encourage those reading this to take action against the police and the ecocidal projects they defend in your own way. The rail blockades, bank shut-downs (Chase is a notible supporter of the pipeline purposed on Wet’suwet’en land), and social support across so-called Canada and the United States have shown we can come together to support each other and bring these corporations and governments to their knees. We would encourage those taking action to think logistically (block the flows and vital functions), to think socially (what will motivate more people to take critical action in a good way), and act respectfully (keep in mind how targeted populations will be affected).

Cheers to the support comrades who are holding it down behind the scenes! Cheers to those shutting the logistics of ecocide across Turtle Island and the planet! Cheers and healing to the prayerful ones and warriors! Cheers to chief Leschi, we hold up our hands to you!

Down with the police! Down with capital!

Towards the good life!

Violence Works: State Power and the Limits of Police by Micol Seigel

The Bitter Waters of Medicine Creek by Richard Kluger