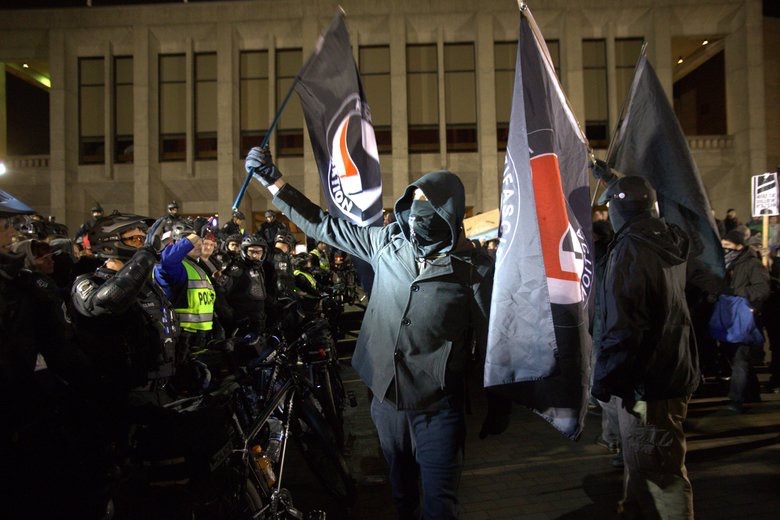 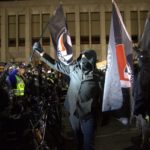 Why the Hokoana Trial Matters

It’s been over two years since an anti-fascist was shot during the January 20th, 2017 counter-demonstrations to Milo Yiannopoulos’ talk at the University of Washington in Seattle. Many have moved past the outcome of that night and swung their attention elsewhere to other events. But, the stance of the state, and the possibility of a month-long trial that has recently begun of the admitted shooter can not be ignored.

The single shot fired into the stomach of the demonstrator that inauguration day was muffled by the hundreds of the arrests and rioting earlier that day in Washington, D.C. The physical and legal atrocities that transpired in D.C. dominated the immediate media cycle, but nearly three years later we should all be watching what unfolds in this Seattle court room.

Elizabeth Hokoana came to the University of Washington with her 9mm handgun that she regularly carries; knowingly in violation of strict no carry regulations on school campuses in Washington State. She says she does not remember shooting the man she identified as an immediate threat, but she knows she did it to “save her husband.” Her lawyers will argue in court that her assault was indeed in “self defense” for she says that the man she shot had a knife. To this day, besides her statement, no evidence of a knife has been found.

(2 hours later) 1030pmish- Marc & Elizabeth Hokoana turn themselves in. They originally claim that Marc Hokoana is the shooter. Both the handgun and Marc Hokoana’s phone are seized and their car impounded. They are taken into custody but released within hours.

Feb. 9th 2017- Search warrant filed by Sgt William Bergin. The warrant sought to review the content of Marc Hokoana’s phone; phone calls, internet searches, text messages, photographs, GPS and “any mention of guns or shooting.” A forensic investigator for the King County Prosecutor’s office finds that the phone has undergone a “factory reset of some sort prior to being examined.” Nothing is found on the phone.

March 28th 2017- Through her lawyer Elizabeth Hokoana reveals that she was the shooter on campus, and not her husband Marc.

May 3rd 2017- Appearing at the King County Courthouse, Elizabeth Hokoana pleads not guilty to one count of first-degree assault, with a firearm enhancement, stemming from the shooting. Her husband, Marc Hokoana, pleads not guilty to one count of third-degree assault over his alleged use of pepper spray. Bail was set at $10,000 for each defendant by King County Superior Court Judge Sean P. O’Donnell, who cited community safety and gave them 48 hours to remain free and make bail arrangements. Prosecutors had asked for $50,000 bail for each, saying they represented a potential danger to the community. The judge barred the couple from possessing firearms and ordered them to keep away from the UW campus.

July 3rd, 2019- Trial Begins. Marc and Elizabeth Hokoana will call 31 witnesses for the defense, most of them police officers. The state has listed as many as 33 witnesses they might call at trial.

After the shooting at the University of Washington on January 20th, 2017, media and media spin becomes a hot topic. The survivor of the shooting chose to engage the media and present a principled and well-respected stance in defense of his anarchist and anti-fascist politics. He spoke of his resilience in the face of such violence and his refusal to participate in the State’s attempt to prosecute the Hokoanas for the shooting. He instead gave restorative justice as an option, a possibility for the harmed and the perpetrators of violence to sit and discuss moving through accountability. Marc and Elizabeth Hokoana predictably refused. The survivor is not participating in any form with the trial currently underway.

Unfortunately, the state continued to prosecute Marc and Elizabeth Hokoana and a trial is unfolding where video from that night is analyzed frame by frame. This process began much earlier than the court room setting we see now and had many different players involved.
Investigation is not a word that any anarchist or antifascist should feel comfortable with. Not when it’s coming from the mouths of the police, or a seemingly friendly journalist. We live in a time where the surveillance of our activities has become commonplace.

The unfortunate reality is that many on the side of anti-fascism have forgotten that the attempt to confront or stop the individuals inside the Right or the system that promotes them to power is a criminal activity. In an effort to be ahead of the narrative, or to gain control of a wildly inaccurate media spin we have begun to rely on “independent” or “friendly” media and at times the courts themselves.

This is not to disregard the level of engagement with the media that is necessary to both build and maintain momentum in the fight against the far-right and the state. But too often the attempt to win the minds in the court of public opinion leads to a fight in the all-too-real-court-that-will-throw-you-in-prison.

In a March 17th, 2017 Seattle Weekly article, journalist Kelsey Hamlin stated that “Numerous antifascists and anarchists have contacted me to relay videos, their experience, and suggest what their online research has gathered.” Hamlin has every good intention, and in fact was one of the few journalists that attempted to counter the dominant narrative of the day. But, at what cost? What was gained by this collusion between members of the anarchist and antifascist community and a local reporter in an effort to “investigate” what happened that night? How much of the work done by us to prove the motive or intent of an enemy or to exonerate some from the label of “violence” in actuality shifted that blame to others?

It is unclear how much of the State’s investigation into Marc and Elizabeth Hokoana was built on the work of citizen journalists, or of independent media, but in the end as a broader tendency we should move away from our attempts to uncover the “truth” as we see it, whether in the still-frame of a video or a counter-lawsuit against the foot-soldiers of a broader enemy.

The case itself currently being tried in Seattle is important for those who engage in direct physical confrontation (known generally as violent confrontation) of the far-right. Both in its manner of investigation, and for its outcome. So far, public elements of the far-right as well as second-amendment advocates have abandoned the Hokoana couple, and their fate rests in a judicial proceeding. The ripple effects of an acquittal will be felt on all sides of this conflict.

In effect, the state of Washington’s version of “stand your ground” is being tested here, and antifascists and anarchists are the test case. If a judge finds that Emily Hokoana was protecting herself and her husband within reasonable means from what she viewed as an imminent assault(RCW 9.94A.030); then she has won the larger legal right to kill us. She fired one bullet that night with the intent to stop, with deadly force, someone she found to be “threatening.” And the fact that we are not speaking about deadly force charges is quite possibly only because of luck and fast acting street medics.

If Elizabeth Hokoana is found guilty, a 15 year sentence could come down. One that in our haste to prove “what happened” that night, we helped bring to fruition whether we meant to or not. We are not responsible for the repression that the state brings, on our comrades or our enemies. But what was gained in those media battles of the first half of 2017? There is a vast difference between controlling a narrative or countering spin and engaging in a style of investigative journalism that can and will lead to criminal charges. And we are negligent to not both understand the difference and implement it.

The trial is expected to end the week of July 23rd, 2019. There are currently trials of Proud Boys, house resolutions about criminalizing popular dissent against fascism, riots in Puerto Rico and Hong Kong, and a comrade just ended their life with the hope that others could gain back theirs. There is a lot to draw our gaze and our time. But we should watch as this unfolds, and count the ways we could have done better. Both for ourselves, our known comrades and those in masks that we fight side-by-side with while never knowing their names.

In solidarity with those who resist.