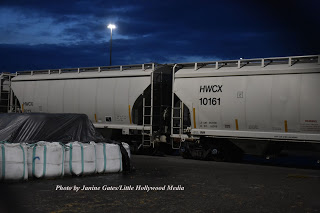 The Olympia Commune 2.0 is now in its third full day, and the blockade is holding strong. A reportback from the first day can be read on Puget Sound Anarchists, as well as texts from two fliers that have been handed out at camp.

Last year’s blockade of a fracking train in solidarity with Standing Rock lasted for seven days before it was evicted in an explosive street battle with the police. 12 people were arrested and are still dealing with the legal fallout.

This morning the local Olympian newspaper published a front page article about the blockade, claiming that there are in fact no fracking materials scheduled to be shipped out. The fact is that the fracking sands are still in the port, and have been getting shipped out continuously since last year, and whether or not a train loaded with fracking sands is imminently waiting to leave, any action that clogs the arteries of capitalism is an action in defense of the earth.

A white man in his 60’s, fired up from reading the Olympian article, showed up at camp this morning and tried to dismantle some of the barricade. A true garbage centrist, he claimed to be against pollution and understood that fracking poisons water, but just didn’t like that those darn kids were uglying up his town by throwing pallets on the train tracks. A group that included people in black and a middle-aged native woman in ceremonial dress confronted and de-escalated the man. He eventually left after shaking hands. A few hours later other angrier white men with work gloves tried to tear down the barricades and threatened to bring ten trucks with plows on the front to drive through the barricade and destroy the camp. Red-faced with rage, they shouted “You have ten minutes!” and “You’re out of control!” at a crowd of people much calmer than them. The centrist antagonist-turned-frienemy returned and de-escalated the plow-truck angry men, eventually walking them away from the camp.

A little later, a crew of Indigenous folks from Tacoma came and offered a beautiful song and prayer. We gathered around barrel fires under makeshift tarps as the space was blessed with song and ceremony. They’re fighting a liquified natural gas pipeline in Tacoma, and said that a victory for us is a victory for them. A few hours later the main activity at the camp was a big native drum and singing circle by the entrance.

There were briefly a group of 8 police SUVs lurking around the camp with their lights on, taking pictures and generally being pig pieces of shit. Tensions rose as people inside prepared for the potential of an eviction, the ever present threat from our enemies in blue. After last year’s blockade the police chief Ronnie Roberts (the former Eugene police chief notable for his role in the crackdown on environmental and animal rights activists known as the Green Scare) voiced his desire that the Port of Olympia stop accepting fracking shipments because it undermines the public’s trust in law enforcement. But whatever his feelings on how to do good PR, the fact remains that the police are the defenders of capitalism. The police are the ones who make sure that Rainbow Ceramics can keep making money off of poisoning water and killing the earth. The police are the absolute enemy.

This is a call to action – wherever you are, there is a frontline. The Leviathan is multifaceted and needs to be struck at in all ways. Any action that makes it harder for trains to move, for police to enforce law and order, for cameras to track enemies of the existent, for prisons to uphold white supremacy, for capitalism to atomize and isolate us, any action that delegitimizes the colonial occupation known as the United States, is an action that allows us to live. When we block the port we open up room to experiment with new, liberatory modes of existence. Let’s get started.